It’s a bit mysterious how this happens, though, because ice crystals are orderly structures of molecules, while aerosols are often disorganized chunks. New research by Valeria Molinero, distinguished professor of chemistry, and Atanu K. Metya, now at the Indian Institute of Technology Patna, shows how crystals of organic molecules, a common component of aerosols, can get the job done. 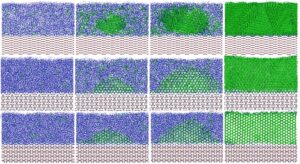 The story is more than that, though – it’s a throwback to Cold War-era cloud seeding research and an investigation into a peculiar memory effect that sees ice form more readily on these crystals the second time around.

The research, funded by the Air Force Office of Scientific Research, is published in the Journal of the American Chemical Society.

Molinero’s research is focused on how ice forms, particularly the process of nucleation, which is the beginning of ice crystal formation. Under the right conditions, water molecules can nucleate ice on their own. But often some other material, called a nucleant, can help the process along.

After several studies on the ways that proteins can help form ice, Molinero and Metya turned their attention to organic ice nucleants (as used here, “organic” means organic compounds containing carbon) because they are similar to the ice-producing proteins and are found in airborne aerosols.

But a review of the scientific literature found that the papers discussing ice nucleation by organic compounds came from the 1950s and 1960s, with very little follow-up work after that until very recently.

“That made me really curious,” Molinero says, “because there is a lot of interest now on organic aerosols and whether and how they promote the formation of ice in clouds, but all this new literature seemed dissociated from these early fundamental studies of organic ice nucleants.”

Additional research revealed that the early work on organic ice nucleants was related to the study of cloud seeding, a post-war line of research into how particles (primarily silver iodide) could be introduced into the atmosphere to encourage cloud formation and precipitation. Scientists explored the properties of organic compounds as ice nucleants to see if they might be cost-effective alternatives to silver iodide.

But cloud seeding research collapsed in the 1970s after political pressures and fears of weather modification led to a ban on the practice in warfare. Funding and interest in organic ice nucleants dried up until recently, when climate research spurred a renewed interest in the chemistry of ice formation in the atmosphere.

“There has been a growing interest in ice nucleation by organic aerosols in the last few years, but no connection to these old studies on organic crystals,” Molinero says. “So, I thought it was time to “rescue” them into the modern literature.”

Phloroglucinol is one of the organic nucleants studied in the mid-20th century. It showed promise for controlling fog, but less for cloud seeding. Molinero and Metya revisited phloroglucinol as it proved potent at ice nucleation in the lab.

One question to answer is whether phloroglucinol nucleates ice through classical or non-classical processes. When ice nucleates on its own, without any surfaces or other molecules, the only hurdle to overcome is forming a stable crystallite of ice (only about 500 molecules in size under some conditions) that other molecules can build on to grow an ice crystal. That’s classical nucleation.

Which applies to phloroglucinol? In the 1960s, researcher L.F. Evans concluded that it was non-classical. “I am still amazed he was able to deduce the existence of a monolayer and infer the mechanism was non-classical from experiments of freezing as a function of temperature alone!” Molinero says. But Molinero and Metya, using molecular simulations of how ice forms, found that it’s more complicated.

“We find that the step that really decides whether water transforms to ice or not is not the formation of the monolayer but the growth of an ice crystallite on top,” Molinero says. “That makes ice formation by organics classical although no less fascinating.”

Holding on to memories of ice

The researchers also used their simulation methods to investigate an interesting memory effect previously observed with organic and other nucleants. When ice is formed, melted and formed again using these nucleants, the second round of crystallization is more effective than the first. It’s assumed that the ice melts completely between crystallizations, and researchers have posed several potential explanations.

Molinero and Metya found that the memory effect isn’t due to the ice changing the nucleant surface, nor to the monolayer of water persisting on the nucleant surface after melting. Instead, their simulations supported an explanation where crevices in the nucleant can hold on to small amounts of ice that melt at higher temperatures than the rest of the ice in the experiment. If these crevices are adjacent to one of the nucleant crystal surfaces that’s good at forming ice, then it’s off to the races when the second round of freezing begins.

Something in the air

Other mysteries still remain – the mid-century studies of organic crystals found that at high pressures, around 1500 times atmospheric pressure, that the crystals are as efficient at organizing water molecules into ice as an ice crystal itself. Why? That’s the focus of Molinero’s next experiments.

More immediately, though, phloroglucinol is a naturally-occurring compound in the atmosphere, so anything that researchers can learn about it and other organic nucleants can help explain the ability of aerosols to nucleate ice and regulate the formation of clouds and precipitation.

“It would be important to investigate whether small crystallites of these crystalline ice nucleants are responsible for the baffling ice nucleation ability of otherwise amorphous organic aerosols,” Molinero says.