An international team headed by HZB researcher Jaime Sánchez-Barriga has shown how spin-polarised currents can be initiated in a controlled manner within samples of topological insulator material. In addition, they were able to manipulate the orientation of the spins of these currents. They thereby demonstrated that this class of materials is suitable for data processing based on spin. The work has been published in the renowned periodical Physical Review B and was selected as “Editor’s Suggestion” article.

Future information technologies should employ considerably less energy for processing data. One exciting class of materials for this comprises topological insulators. Topological insulators are distinguished by their electrons at the surface being extremely mobile, while the bulk material within is an insulator and does not conduct. Since electrons also simultaneously carry a magnetic moment (spin), topological insulators might also make “spintronic” components feasible. Spintronic components would not be based on the movement of charge carriers like electrons (as in semiconductor components), but instead on the transport or manipulation of their spins. This would require considerably less energy. 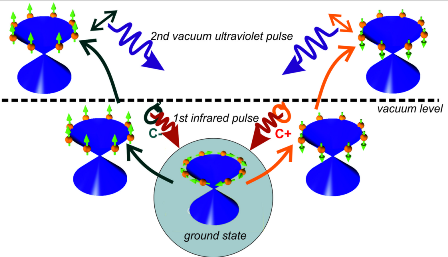 The illustration depicts the characteristic spin orientation (arrows) of electrons in a topological insulator (below). Using an initial circular polarised laser pulse, the spins are excited and point up or down. This can be proven by a second linearly polarised laser pulse (above).
CREDIT: HZB

An international team headed by HZB physicist Jaime Sánchez-Barriga has now shown how the spins of the electrons in topological insulators can be controlled. The team investigated samples of antimony-telluride, a topological insulator, using circularly polarised laser light. They were able to initiate and direct currents of electrons whose spins were oriented in parallel (i. e., spin-polarised currents) using the “rotational direction” of the laser light. In addition, they were successful in changing the orientation of the spins as well. The team was made up of experimentalists from the Max Born Institute in Berlin and Lomonossow University Moscow, together with theoreticians from Ludwig-Maximilians-Universität München (LMU). The work has been published in the renowned journal Physical Review B and was selected as “Editor’s Suggestion” article.

“If you were to utilise magnetically doped topological insulators, you could also probably store this spin information”, explains Oliver Rader, who heads the research group for green spintronics at HZB. “To investigate this however, and also be able to explore the dynamic behaviour of the magnetic moments in particular, ultra-short light pulses in the soft X-ray region are needed. These kinds of experiments can become standard with the planned upgrade of the BESSY II synchrotron source to BESSY-VSR”, he hopes.