Óscar, the 47-year-old patient, was suffering from severe dilated cardiomyopathy with biventricular heart failure. He had been on the transplant waiting list for more than a year due to difficulty finding a donor heart.

“It was this or it was over,” Óscar said in Spanish. “My situation before the operation was pretty bad because I could hardly take a shower, tie my shoes and do many things. I could not even sleep. I would lie down on the bed and feel like I was drowning because my heart had no strength.” 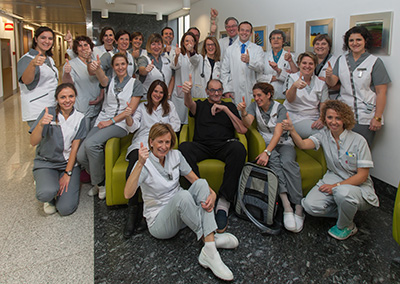 Óscar, the first patient to receive the SynCardia Total Artificial Heart in Spain, poses with his medical team at Clínica Universidad de Navarra.

According to Óscar, he could only fall asleep standing at the window of his bedroom, leaning on a pillow. He had slept this way for more than two weeks prior to receiving the Total Artificial Heart. Now, he is able to sleep lying down again.

“The progressive worsening of the patient’s health left us no choice but to seek an urgent alternative,” said Dr. Gregorio Rábago

, director of cardiac surgery at Clínica Universidad de Navarra. “That is why we decided to implant the SynCardia Total Artificial Heart – so that we could stop his deterioration and recover his health until a matching donor heart is found.”

Óscar had been listed for transplant since August 2015, but finding a donor heart proved difficult because of his rare blood type and his large size, which would require the donor to weigh at least 220 pounds (100 kg).

As his condition deteriorated, the frequency of his hospital admissions increased. In 2016, Óscar was hospitalized eight times. During his most recent stay in the clinic—which lasted for more than a month—he responded poorly to medical treatment.

“The month before the implant, the severity of the patient’s condition had reached the point of him having to stay permanently connected to a continuous infusion pump and being unable to go home,” said Dr. Rábago. “In view of this situation, on September 21, we performed surgery to implant the SynCardia Total Artificial Heart.”

Similar to a heart transplant, the SynCardia Total Artificial Heart replaces both failing heart ventricles and the four heart valves, eliminating the symptoms and source of end-stage, biventricular heart failure. Unlike a donor heart, the Total Artificial Heart is readily available at SynCardia Certified Centers, allowing patients to receive a new heart without the wait.

Two months after receiving his Total Artificial Heart, Óscar was able to stop dialysis because his kidneys had recovered. In addition to walking around the clinic, he exercises on the bike and the treadmill in the gym regularly — something he could not imagine doing just three months ago.

In November, Óscar was switched to the Freedom® portable driver, a wearable power supply for the Total Artificial Heart that allows stable patients to return home while they wait for a donor heart. Worldwide, more than 300 patients have been supported by the Freedom driver, accounting for more than 76,000 patient days of support.

Dr. Rábago says they hope to discharge Óscar from the hospital soon. When he does go home, Óscar says he is looking forward to having dinner with his friends and seeing his dogs, who have not seen him for four months.

“If there’s anyone in my situation,” he added, “let them cheer up.”

SynCardia Systems, LLC in Tucson, Ariz., is the privately-held manufacturer of the world’s first and only FDA, Health Canada and CE approved Total Artificial Heart. For people suffering from end-stage heart failure affecting both sides of the heart (biventricular failure), the SynCardia temporary Total Artificial Heart is used as a bridge to transplant, helping them survive until a matching donor heart becomes available. SynCardia also manufactures the Freedom® portable driver, which powers the SynCardia Total Artificial Heart and allows clinically stable patients to be discharged from the hospital to enjoy life at home while they wait for a heart transplant.