Dating back to the 19th century and thought to be one of the oldest and rarest sherries on the market today, the exclusive run of “Versos 1891” bottles goes on sale today from Bodegas Barbadillo and a select group of wine merchants across the globe.

The Versos 1891 was originally a gift to Manuel Barbadillo by his father as a christening present in 1891, and was already then described as an old Amontillado. Stored in the humid cellars of Barbadillo in Sanlucar de Barrameda, Andalusia, generations of winemakers from the Barbadillo family, as well as the firm’s coopers and cellar masters, have acted as its custodians while it aged slowly in the balanced conditions required of the finest old sherries. 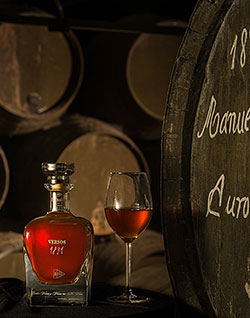 Each bottle of Versos 1891 will have an NFC OpenSense tag incorporated into the bottle that can distinguish between the product’s “factory sealed” and “opened” states. Using Thinfilm’s custom app and cloud-based platform, the tag can wirelessly transmit authentication data to consumers with the tap of an NFC-enabled smartphone. In addition, each tag is uniquely identifiable and trackable, and cannot be cloned.

“Versos 1891 is the celebration of an extraordinary man, a legendary winery, and a deep-rooted tradition of winemaking,” said Manuel Barbadillo, Chairman of Barbadillo and grandson of Don Manuel. Given the rarity of this release and its significance to the Barbadillo family, we feel compelled to protect it. Thinfilm’s technology delivers that protection, for our business and our valued consumers.”

In May of 2013, the Institute of Masters of Wine celebrated its 60th Anniversary with a formal tasting of Versos 1891, during which the sherry was acclaimed for its “elegance” and other outstanding qualities.

“It’s gratifying that an emerging Norwegian technology company can deliver value to a centuries-old Spanish winery on such a meaningful initiative,” said Davor Sutija, CEO of Thinfilm. “The Barbadillo brand has a rich history, and we’re delighted that our NFC OpenSense technology is playing a role in protecting that legacy.”

Thinfilm worked closely with Constantia Flexibles, a trusted partner and one of the world’s leading manufacturers of flexible packaging and labels, on incorporating the NFC OpenSense technology within the Versos 1891 bottle. Spear USA Inc., Constantia’s label division and an industry leader within the wine and spirits field, led the integration efforts.

Thinfilm is a leader in the development and commercialization of printed electronics. The first to commercialize printed, rewritable memory, the Company is creating printed systems that include memory, sensing, display, and wireless communication, all at a low cost unmatched by any other electronic technology. Thinfilm’s roadmap integrates technology from a strong and growing ecosystem of partners to enable the Internet of Everything by bringing intelligence to disposable goods.

Founded in 1821 in Sanlucar de Barrameda, in southern Spain, Bodegas Barbadillo remains 100% family owned by the Barbadillo family with its original cellars and 500 ha of Jerez Superior vineyards.

Barbadillo is dedicated to making the highest quality Spanish wines and is especially renowned for its white wine ‘Barbadillo’, and its Sherries, especially Manzanilla which is unique to Sanlucar.  The company furthermore owns the ‘Vega Real’ winery in D.O. Ribera del Duero and Bodega Pirineos in D.O.Somontano, with an exciting array of excellent quality wines from each. www.barbadillo.com