As part of the “Shaping Future“ research project, Fraunhofer researchers have developed an original participatory foresight methodology with which laymen can describe their future technology requirements and share them with scientists. Initial results show that people want to have technologies that improve their mental and physical capabilities, protect their privacy and store and transport emotions. 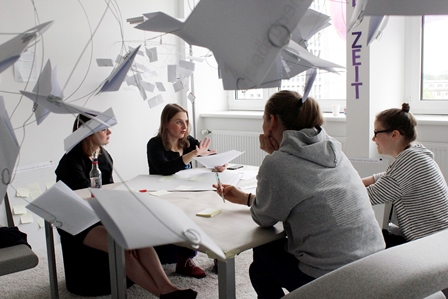 © Photo Fraunhofer IAO
Storytelling, creative methods and prototyping: Shaping Future is an original participatory foresight methodology that draws from both design know-how and the social sciences. In a multi-staged co-idealization process, laypersons – people with a non-professional interest in technology – develop original notions of prospective human-machine cooperation and articulate their ideas in a variety of original formats.

For the future success of innovations it is crucial to know how they are accepted by users. To date, there has been a lack of processes for ordinary citizens to exchange ideas with researchers. In the “Shaping Future“ research project the Center for Responsible Research and Innovation CeRRI at the Fraunhofer Institute for Industrial Engineering IAO has developed an original participatory foresight methodology which allows just that: People can articulate their wishes and concerns relating to future technical solutions, describe technology requirements and exchange these ideas with Fraunhofer experts. The latter are able to take on the ideas, develop them further and use them for future research work. Using roadmaps, the scientists show which technological steps have been taken and which social and legal conditions must be fulfilled in order to implement the ideas. From many particularly promising ideas designers have produced speculative prototypes in order to present them as interactive exhibits at an exhibition both to a specialist audience and the general public. These can be seen from 30 July until 26 October 2016 in JOSEPHS®, an interactive exhibition space operated in downtown Nuremberg by Fraunhofer and the Friedrich Alexander University Erlangen-Nuremberg.

“It‘s not just a matter of taking part. Anyone developing new technologies must include the people. Otherwise there is a risk that innovations will fail to reflect the user‘s needs,“ says Marie Heidingsfelder. At the Fraunhofer Center for Responsible Research and Innovation CeRRI in Berlin, she is responsible for the research project: “The success of the first workshops shows that the method works.“ Over 100 people of different ages and occupational backgrounds were asked to think about technologies for the year 2053. In four workshops they discussed the topics of relationships with machines, health, work, and sustainable mobility. “The results were very varied. But we were also able to identify overriding themes,“ describes Heidingsfelder.

Big Mother instead of Big Brother

An important overall finding was that many participants wanted soft technologies that would be as invisible as possible and could also be easily worn on the body. Moreover, an important factor were spatial models which flexibly and individually allow you to withdraw or to interact with other people as required. One idea, for example, were protective capsules for public transport, which could be used in public transport or could be flexibly pulled over the head and body whenever one wants to be sheltered. Technologies that help to improve personal mental and physical capabilities were also in demand. “Against the background of a world that is becoming ever more complex, many people would like a type of “Big Mother“ to help with making decisions or dealing with physical strains,“ reports Heidingsfelder. Finally, there was a call for machines to better pass on human emotions to other people, as a kind of interpreter. For example, in form of transmittable recollection memories, which allow other people to empathize with your own experiences. On the topic of health, there was little mention of doctors and hospitals. Rather, people wanted technologies that allow them to diagnose and cure themselves. “For example, the participants of our workshop envisioned the hospital of the future as a drive-in variant,“ says Heidingsfelder.

To project the participants into the year 2053, the project team inspired the participants  with futuristic pictures, products and research projects – from films, artistic designs and insights into research laboratories. With the aid of creative methods, storytelling and design research techniques, the participants developed specific solutions for scenarios in 2053 – for example, in the case of the health workshop, for illnesses. In the large material store of CeRRI, each participant assembled a first prototypic object of a favorite idea in order to illustrate its function and operating interface.

“The method envisions that different types of people interact. On the one hand, we had a very heterogeneous group of participants and, on the other, an interdisciplinary project team developing new methods at the nexus of design and social science,“ remarks Heidingsfelder. Experts in the fields of microelectronics, optics, materials, logistics, information technology, production, ergonomics, and medicines carefully examined the prototypes. They identified those they considered particularly interesting, innovative or sustainable and thought about what a technological solution could look like.

The “Shaping Future“ research project is supported by the Federal Ministry of Education and Research. “The participatory foresight methodology can be transferred to different key areas in order to include the requirements of users in innovation and research strategies“, says Heidingsfelder.

Technologies for the year 2053

From the incentives provided by the members of the public, technology experts from the Fraunhofer institutes FIT, IAIS, IAO, IAP, IFF, IML, IOF, IPA, IZM and MEVIS developed a total of eight technology roadmap blueprints for new research projects or innovative products:

(2) Modular Enhancement Set: Modular Exoskeleton that supports people in everyday situations if particular physically demanding challenges have to be overcome.

(3) Muscle to Go: A gel that allows reconstruction of your own body after accidents, severe illnesses or tumors, also suitable for personal enhancement and physical modifications.

(6) Smart Buddy: Learning KI system that gives prioritized suggestions for action and enables the initiation of contacts according to individual interests and demands.

(8) Emo Lens: Contact lens indicating the emotional condition of the person facing you.