A University of Oklahoma-led team of physicists believes chip-based atomic physics holds promise to make the second quantum revolution—the engineering of quantum matter with arbitrary precision—a reality.  With recent technological advances in fabrication and trapping, hybrid quantum systems are emerging as ideal platforms for a diverse range of studies in quantum control, quantum simulation and computing.

James P. Shaffer, professor in the Homer L. Dodge Department of Physics and Astronomy, OU College of Arts and Sciences; Jon Sedlacek, OU graduate student; and a team from the University of Nevada, Western Washington University, The United States Naval Academy, Sandia National Laboratories and Harvard-Smithsonian Center for Astrophysics, have published research important for integrating Rydberg atoms into hybrid quantum systems and the fundamental study of atom-surface interactions, as well as applications for electrons bound to a 2D surface. 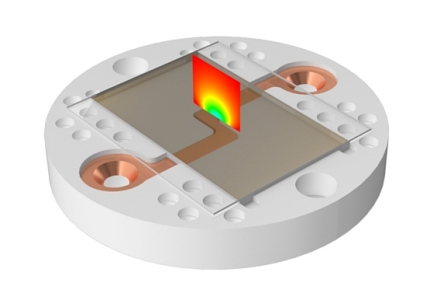 The image shows a quartz surface above the electrodes used to trap atoms. The color map on the surface shows the electric field amplitude.

“A convenient surface for application in hybrid quantum systems is quartz because of its extensive use in the semiconductor and optics industries,” Sedlacek said. “The surface has been the subject of recent interest as a result of it stability and low surface energy.  Mitigating electric fields near ‘trapping’ surfaces is the holy grail for realizing hybrid quantum systems,” added Hossein Sadeghpour, director of the Institute for Theoretical Atomic Molecular and Optical Physics, Harvard-Smithsonian Center for Astrophysics.

“Our results show that binding is due to the image potential of the electron inside the quartz,” said Shaffer.  “The electron can’t diffuse into the quartz because the rubidium adsorbates make the surface have a negative electron affinity.  The approach is a promising pathway for coupling Rydberg atoms to surfaces as well as for using surfaces close to atomic and ionic samples.”

A paper on this research was published in the American Physics Society’s Physical Review Letters.  The OU part of this work was supported by the Defense Advanced Research Projects Agency Quasar program by a grant through the Army Research Office, the Air Force Office of Scientific Research and the National Science Foundation.

Source:  The University of Oklahoma