Seaport footprints will need to expand by up to 3,689 square kilometers (1,424 square miles) worldwide in the next three decades to cope with the combination of sea-level rise and rising demand, according to a new study published in Earth’s Future, a peer-reviewed scientific journal focusing on climate change and future sustainability. 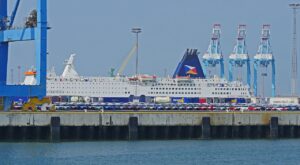 Previous studies of the economic impacts of climate change on ports have focused on the costs of adapting existing port facilities to sea level rise and stronger, more frequent storms. But demand for port services will also continue to rise, according to UN maritime trade and industry projections.

Policies designed to limit global temperature rise to 2 degrees Celsius by the end of century are expected to slow trade growth overall, according to the new study, and shift distribution of traded goods, increasing, for example, movement of bioenergy commodities and decreasing demand for fossil fuels . Energy commodities currently account for about 40% of seaborne trade.

Ships transport 80% of trade goods worldwide. Ports have been expanding since the 1980s to meet increasing growth in the sector driven by liberalization of trade, the opening of China’s economy and increased use of containers.

Incorporating adaptation strategies into new construction is a relatively low-cost means to prevent future disruption from the effects of climate change, according to the study’s authors.