In disasters, rescuers usually communicate via satellite if phone and mobile telecommunication is out. But that has drawbacks: Once the data lines are overloaded, the connection disconnects. In addition, there barely are systems available yet for moving vehicles. Fraunhofer researchers have developed a new antenna system which reliably transmits data via satellite with a high-bandwidth and which is suitable for mobile use. 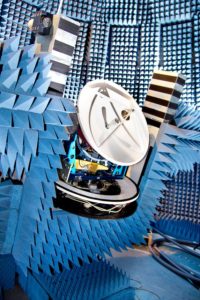 © Photo Fraunhofer IIS
At the »Facility for Over-the-Air Research and Testing (FORTE)« the algorithms of the KASYMOSA antenna will be tested with different movement profiles.

Natural disasters regularly strike the world. As in the case of the tsunami in Japan or the earthquake in Nepal, electricity and telephone lines are destroyed in this process as well. Usually, mobile communications fail over a large area because the poles are damaged. That is why during disasters, rescue services turn to their own communications technology – mostly over satellite systems. Data or phone calls are sent directly to a satellite in space and, from there, to receiving stations on Earth. As a result, the rescue workers are not dependent on the communications infrastructure on the ground.

Until recently, satellite communication has had its disadvantages. The setting up of a small satellite station in the field takes some time for example. Once built, it cannot be easily moved. Moreover, the connection breaks off when a lot of data has to be transmitted or when a thunderstorm interferes. The satellite antenna has to be aligned very precisely to the satellite – just like in the case of television. It is now virtually impossible to communicate with broadband in a moving car via satellite, since the antenna constantly moves out of focus due to the movement of the vehicle.

In the joint project KASYMOSA (Ka-band systems for mobile satellite communications), several research institutions have developed a number of technologies to make satellite communications fit for mobile use. The Fraunhofer Institute for Integrated Circuits IIS in Erlangen is involved with three working groups. For mobile communications, researchers have to overcome several hurdles. The first issue is to shift and position the satellite antenna on a moving car quickly enough so that it always keeps the satellites in view. This involves high precision: it can only move by a maximum of 0.2 degrees from the focus of the satellite. Even just getting into a car moves it more, though. The partners have therefore developed algorithms for a mechanism which can move the antenna precisely and quickly. They control the movement of the antenna precisely so that it compensates for a change in direction within fractions of a second.

A classic satellite antenna with a diameter of 60 centimeters is impractical on a car roof. It would increase the shaking. “For some time, there has been a worldwide trend to develop flat satellite antennas: the panel antennas,“ says Project Manager Florian Raschke of the IIS. These are already installed in the outer skin of aircrafts today to let passengers use the Internet via satellite: the in-flight Internet. An airplane moves very smoothly though and changes its position to the satellite relatively slowly. The requirements for such an antenna are less than those for the antenna of a car, which might rumble over bumpy dirt roads during a disaster situation.

Internet users have become accustomed to a connection which is stable and which does not just break off when a lot of data is flowing over the line. If a person watches an HD movie or uses video calling, then, at most, the picture changes. It becomes grainier, more pixelated, when the data line is heavily loaded – but rarely does the connection break off completely. The reason is that Internet technology is now designed so that it can control an application like the browser or Skype in such a way that the quality of the image is reduced but the functionality is preserved.

Connection without interruptions or dropouts

With satellite communications that‘s not the case today. If the line is overloaded, it breaks off easily. TV viewers know that during storms, instead of their satellite image getting worse little by little, it just disappears suddenly. In other words, satellite communication has so far been lacking a continuous technology that controls the connection quality (like with the Internet) and adapts to the current utilization of the data line. Researchers have changed the data processing so that the data rate changes depending on the situation. For this purpose, a special modem has been developed for the transmission of the data.

“In this way, we achieve a very high bandwidth of several megabits per second,“ says Raschke. “Of course, we don‘t approach the Gigabit streams of a solid data line, but for satellite communication, it‘s a big step.“ Thanks to this technology, rescuers in the future will be able to send videos of the local situation and maps quickly, and without the connection breaking off. Just like you are used to from the Internet. And even clear satellite telephone calls without dropouts will be possible.

So far, individual senders can only connect with each other via a central, a hub. However, the newly developed modem now establishes direct connections. This contributes to data security not least because the transmitter and receiver now make direct contact with each other, and the data stream is no longer running through the hub.

The KASYMOSA project will come to an end this summer. A demonstrator of the new communication system will then be available, which will be tested further. Industry partners from various sectors are invited to test the system in various applications and to help it become ready for production.