Last spring, Trinity Health became an early adopter of the pulsed xenon UV disinfection technology by deploying two of the sanitizing systems at its acute care hospital. Now, Trinity Homes has become the first long term care facility in North Dakota to incorporate the pulsed xenon UV disinfection devices into its infection control practices. In the case of both facilities, the robots were purchased with funds provided by the Trinity Health Foundation Board. 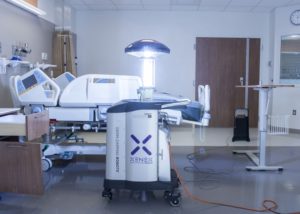 Brenda Lokken, director of Infection Control at Trinity Homes, says the robots provide an extra layer of protection for nursing home residents. “We take our mission to maintain a safe environment for our residents very seriously,” Lokken said. “The Xenex room disinfection system incorporates germicidal UV-C light, which studies show is extremely effective in eliminating viruses, bacteria and other pathogens on surfaces that could pose a health risk to our residents and employees.”

The Centers for Disease Control and Prevention has urged healthcare providers to intensify their efforts in the fight against multi-drug resistant organisms. Lokken says Trinity Homes already follows CDC best practices for curbing infections, but the nursing facility is proud to take an additional precaution. Xenex Disinfection Services’ Germ-Zapping Robots have been credited for helping healthcare facilities in the U.S. decrease their Methicillin-resistant Staphylococcus aureus (MRSA), Clostridium difficile (C.diff) and surgical site infection rates by more than 50, 70 and 100 percent respectively, according to peer-reviewed literature.

Dave Pope, Housekeeping Director at Trinity Homes, says housekeeping staff have spent the last week learning how to operate the units. After standard cleaning procedures, a staff member wheels the robot into a room, begins the automated sequence, and then leaves the room to allow the robot to deliver a lethal dose of UV light to destroy bacteria, spores, fungus and viruses within minutes.

Lokken says both the Infection Control and Housekeeping departments will work closely with Xenex representatives in the coming months to implement a standard operating plan to achieve measurable outcomes toward the goal of reducing healthcare associated infections.