Machines and electronic devices often generate waste heat that is difficult to utilize. If electricity could be generated from this waste heat, it would offer a means for a clean and sustainable power production: Such a technology would be ideally suited for low-power electronics applications such as wearables or low-cost Internet-of-Things devices. This includes, for example, wearable (medical) devices and sensors, with a wide range of applications in the healthcare and sports industry, in smart buildings and mobility applications.

Thermoelectric generators, machines that generate electricity by exploiting temperature differences, already exist but their conversion efficiency is generally low and only little electricity is produced. Generating more electricity would require materials that simultaneously have high electrical conductivity and low thermal conductivity. These two requirements, however, are often mutually exclusive. 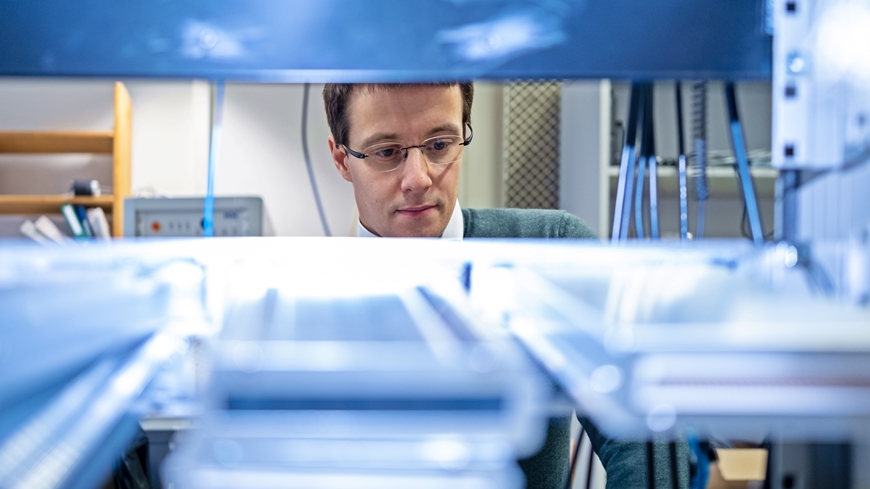 Mickael L. Perrin in his lab at Empa. Here he will set on to create a quantum heat engine that operates at room temperature using graphene nanoribbons. Image: Empa

Quantum dots as a solution

In the last few years, several research groups the world over have shown that thermoelectric conversion can be greatly enhanced by exploiting quantum effects. For example, by using quantum dots that act as highly selective energy filters, drastic increases in conversion efficiency have been reported, some even approaching some of the limits set by the laws of thermodynamics. The problem: The quantum machines, also called quantum heat engines, have to be cooled down to temperatures a few degrees above absolute zero – so something like this is hardly useful in everyday life.

Researchers at Empa might be able to overcome this problem and create a quantum heat engine that operates at room temperature. Mickael L. Perrin, a researcher in Empa’s Transport at Nanoscale lab led by Michel Calame, came up with the idea of using graphene nanoribbons – which are an Empa specialty. The very first graphene nanoribbons were synthesized by another research group at Empa: Roman Fasel and his colleagues at Empa’s Nanotech@Surfaces lab. For several years now, the Empa researchers have worked on different approaches to create electronic devices from such nanoribbons.

Mickael L. Perrin was able to make graphene nanoribbons behave as quantum dots, with some of them stable up to a temperature of -123 degrees Celsius, i.e. at much higher temperatures than the quantum dots used before for thermoelectric conversion. Now the goal is to integrate such graphene nanoribbons into a quantum heat engine and make it work at room temperature. As the nanoribbons are only a few nanometers in size, making contact to them will require the development of special fabrication techniques, which will be implemented at the Binnig and Rohrer Nanotechnology Center in the IBM Research Center in Rüschlikon. Moreover, custom-designed measurement systems will be needed to characterize the energy conversion efficiency.

If all goes as planned, Perrin may create a tiny heat engine on a chip in the coming years. Not only could it generate electricity from waste heat, but conversely, by reversing the operation principle, it would be suited for efficient cooling.

With his two successful research grants, Mickael L. Perrin will start his assistant professorship at ETH Zurich, in the Department of Information Technology and Electrical Engineering, in the next few months. Over the next years, he will continue his research at Empa, where state-of-the-art equipment is available for the thermoelectric characterization of quantum heat engines.

Hopefully only a temporary solution

The funding for Perrin’s project comes from the SNSF and the State Secretariat for Education, Research and Innovation (SERI). Due to the failed framework agreement between Switzerland and the EU, Switzerland is excluded from the current European research program, Horizon Europe. To step in, ERC Starting grants are funded directly by SERI this year. This is the only way to keep highly talented young researchers in Switzerland. In order to receive the allocated funding directly from the EU, Mickael L. Perrin and the other 27 grantees from Switzerland would have to move to a foreign university that is part of the European Research Area.