Researchers at the Energy Department’s National Renewable Energy Laboratory (NREL) discovered single-walled carbon nanotube semiconductors could be favorable for photovoltaic systems because they can potentially convert sunlight to electricity or fuels without losing much energy. 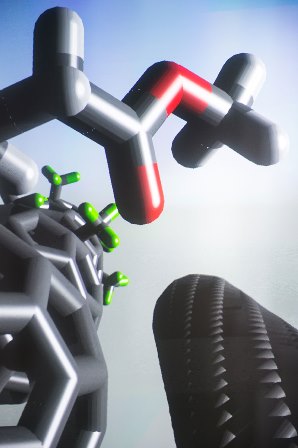 The research builds on the Nobel Prize-winning work of Rudolph Marcus, who developed a fundamental tenet of physical chemistry that explains the rate at which an electron can move from one chemical to another. The Marcus formulation, however, has rarely been used to study photoinduced electron transfer for emerging organic semiconductors such as single-walled carbon nanotubes (SWCNT) that can be used in organic PV devices.

In organic PV devices, after a photon is absorbed, charges (electrons and holes) generally need to be separated across an interface so that they can live long enough to be collected as electrical current. The electron transfer event that produces these separated charges comes with a potential energy loss as the molecules involved have to structurally reorganize their bonds. This loss is called reorganization energy, but NREL researchers found little energy was lost when pairing SWCNT semiconductors with fullerene molecules.

„What we find in our study is this particular system — nanotubes with fullerenes — have an exceptionally low reorganization energy and the nanotubes themselves probably have very, very low reorganization energy,” said Jeffrey Blackburn, a senior scientist at NREL and co-author of the paper „Tuning the driving force for exciton dissociation in single-walled carbon nanotube heterojunctions.”

The paper appears in the new issue of the journal Nature Chemistry. Its other co-authors are Rachelle Ihly, Kevin Mistry, Andrew Ferguson, Obadiah Reid, and Garry Rumbles from NREL, and Olga Boltalina, Tyler Clikeman, Bryon Larson, and Steven Strauss from Colorado State University.

Organic PV devices involve an interface between a donor and an acceptor. In this case, the SWCNT served as the donor, as it donated an electron to the acceptor (here, the fullerene). The NREL researchers strategically partnered with colleagues at Colorado State University to take advantage of expertise at each institution in producing donors and acceptors with well-defined and highly tunable energy levels: semiconducting SWCNT donors at NREL and fullerene acceptors at CSU. This partnership enabled NREL’s scientists to determine that the electron transfer event didn’t come with a large energy loss associated with reorganization, meaning solar energy can be harvested more efficiently. For this reason, SWCNT semiconductors could be favorable for PV applications.

Funds for the research came from the Energy Department’s Office of Science.

NREL is the U.S. Department of Energy’s primary national laboratory for renewable energy and energy efficiency research and development. NREL is operated for the Energy Department by The Alliance for Sustainable Energy, LLC.