In the field of industrial engineering, using simulations to model, predict and even optimise the response of a system or device is widespread, as it is less expensive and less complex -and, sometimes, less dangerous- than fabricating and testing several prototypes. 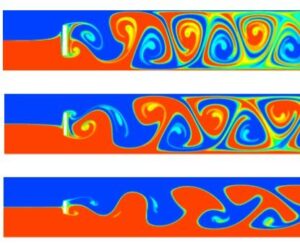 This type of simulation studies uses numerical methods that, depending on the problem to be addressed -for example, reducing the aerodynamic forces of an aircraft by changing its shape or using the minimum possible amount of material on elements under loading without breaking- require the simulation of a wide variety of possible combinational cases, which entails high computational costs.

The researchers from the School of Industrial Engineering of the University of Malaga Francisco Javier Granados Ortiz and Joaquín Ortega Casanova have taken one step further by developing a novel computational design optimisation method that reduces these simulation costs by using artificial intelligence.

They have developed a new methodology with Machine Learning algorithms to predict whether a combination of the design parameters of a problem will be useful or not, based on the objective pursued, and thus guide the design process.

„This method enables us to obtain faster optimised designs by discarding simulations of little or no interest, thus saving not only physical prototype fabrication costs, but also those related to simulation”, explain the researchers of the Area of Fluid Mechanics.

Particularly, this procedure has been applied to the design of a mechanical mixer that produces a significant increase in heat/mass transfer between two fluids thanks to vortex shedding, which results in an oscillating flow. „Based on the design parameters of the mixer, with our method we have verified that this flow can be controlled and achieve an efficient increase in mixing, but, at the same time, a decrease in pressure drop within it”, says Ortega Casanova.

The results of this research were published in the scientific journal Physics of Fluids, which selected this publication as one of its „Editor’s Picks”.