Using sunlight to drive chemical reactions, such as artificial photosynthesis, could soon become much more efficient thanks to nanomaterials.

This is the conclusion of a study published led by researchers in the Department of Physics at Imperial College London, which could ultimately help improve solar energy technologies and be used for new applications, such as using sunlight to break down harmful chemicals. 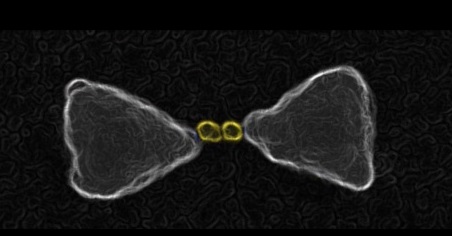 Sunlight is used to drive many chemical processes that would not otherwise occur. For example, carbon dioxide and water do not ordinarily react, but in the process of photosynthesis, plants take these two chemicals and, using sunlight, produce oxygen and sugar.

The efficiency of this reaction is very high, meaning much of the energy from sunlight is transferred to the chemical reaction, but so far scientists have been unable to mimic this process in manmade artificial devices.

One reason is that many molecules that can undergo chemical reactions with light do not efficiently absorb the light themselves. They rely on photocatalysts – materials that absorb light efficiently and then pass the energy on to the molecules to drive reactions.

In the new study, researchers have investigated an artificial photocatalyst material using nanoparticles and found out how to make it more efficient.

This could lead to better solar panels, as the energy from the Sun could be more efficiently harvested. The photocatalyst could also be used to destroy liquid or gas pollut

ants, such as pesticides in water, by harnessing sunlight to drive reactions that break down the chemicals into less harmful forms.

Lead author Dr Emiliano Cortés from the Department of Physics at Imperial, said: “This finding opens new opportunities for increasing the efficiency of using and storing sunlight in various technologies.

“By using these materials we can revolutionize our current capabilities for storing and using sunlight with important implications in energy conversion, as well as new uses such as destroying pollutant molecules or gases and water cleaning, among others.”

The material that the team investigated is made of metal nanoparticles – particles only billionths of a metre in diameter. Their results are published today in the Journal Nature Communications.

The team, which included researchers from the Chemistry Department at University of Duisburg-Essen in Germany led by Professor Sebastian Schlücker and theoreticians from the Rensselaer Polytechnic Institute and Harvard University at the US, showed that light-induced chemical reactions occur in certain regions over the surface of these nanomaterials.

They identified which areas of the nanomaterial would be most suitable for transferring energy to chemical reactions, by tracking the locations of very small gold nanoparticles (used as a markers) on the surface of the silver nanocatalytic material.

Now that they know which regions are responsible for the process of harvesting light and transferring it to chemical reactions, the team hope to be able to engineer the nanomaterial to increase these areas and make it more efficient.

Lead researcher Professor Stefan Maier said: “This is a powerful demonstration of how metallic nanostructures, which we have investigated in my group at Imperial for the last ten years, continue to surprise us in their abilities to control light on the nanoscale. The new finding uncovered by Dr Cortés and his collaborators in Germany and the US opens up new possibilities for this field in the areas photocatalysis and nanochemistry.”