Researchers at Institute of Industria Science, The University of Tokyo have uncovered the mechanism and structural origin behind “avalanches”, where particles packed into a disordered “glassy” state suddenly undergo ordering. The finding may guide how detrimental structural change in glassy materials and drugs may be avoided.

Researchers at the University of Tokyo, Prof. Hajime Tanaka, Project Research Associate John Russo (currently lecturer at University of Bristol), and JSPS Postdoctoral Research Fellow Taiki Yanagishima have uncovered the structural origins behind the phenomenon of “avalanche” in glasses, where particles tightly packed into a so-called “glassy” state undergo sudden “avalanche” like particle displacements, accompanied by parts of the solid transforming into a more ordered state. Furthermore, they identified a common mechanism followed by “crystallisation” e.g. water freezing, and “ageing” e.g. distortions seen in old panes of glass. 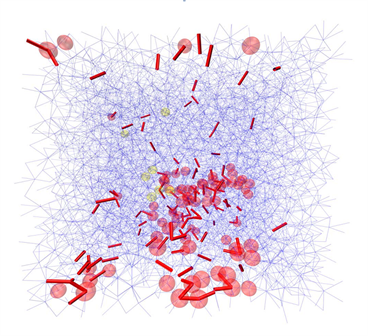 Change and correlation between a particle “avalanche” and changes in the “force network” structure.
After particle motion has been locally excited (yellow), an “avalanche” like collective motion is generated (red). New connections between particles are formed to keep force balance when this occurs (red lines). Most connections from before the event (blue lines) do not change.
©2017 Taiki Yanagishima, John Russo, Hajime Tanaka

Recent years have seen great interest in “glasses”, materials which have liquid-like structure but solid-like behaviour. The University of Tokyo team computationally studied “hard sphere glasses”, where a large number of particles are crammed together into a disordered state. They found that rapid changes in structure started from particles which had slightly more space around them compared to others, and whose neighboring particles were significantly less ordered. These small particle displacements led to a drastic effect on the “skeletal” structure supporting mechanical balance, causing a significant knock-on effect in the form of an “avalanche”.

Glasses are solid materials with the characteristics of liquids; conversely, they lose many of these characteristics when their structure changes. Examples include pharmaceuticals whose structure determines how quickly they dissolve; semiconductor materials may have their electronic properties degraded; ice formation in cryogenic samples can have a detrimental effect. It is thus crucial to gain insight into how such structural change is caused, and how it propagates. This research promises to form an important part of the design principles behind the development of new materials.

“Thus far, it was unclear how a glass that apparently looks like a stable solid can crystallize and age with time. Our study shows that a loss of mechanical balance induced by small motion of several particles triggers avalanche-like events, inducing an irreversible structural change. Thus, this phenomenon is quite similar to snow avalanche.” says Tanaka. He continues, “We are hoping that our finding will contribute to the stabilization of various glassy materials and drugs in a glassy state.”

Source: Institute of Industrial Science, The University of Tokyo