Researchers at the Technical University of Munich (TUM) have developed a visual communication system for hearing-impaired employees in logistics. Data glasses display information relevant to the work process in the employee’s field of view. 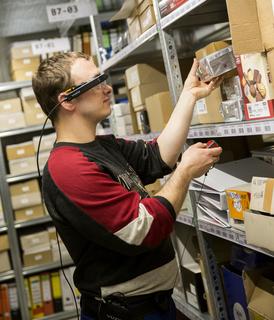 Augmented Reality, which unites the real and virtual worlds, has long been a research focus area at the TUM Chair for Materials Handling, Material Flow, Logistics, says Prof. Willibald Günthner. Here instead of concentrating on new apps, the researchers work on the application of the technology in logistics, specifically in picking.

During picking, orders are processed by employees who retrieve particular goods from the storage facility which are then placed at another location. “The employee has to know where to go and what products to take,” says Günthner. Usually this information is written on a piece of paper or shown on a display.

The researchers had the idea of replacing the paper and display solutions with data glasses. The advantage: Employees’ hands remain free, resulting in more freedom of movement; they are also led to the right destination visually. Günthner and his team have registered the technology under the trademark ‘Pick-by-Vision’.

The three-year research project “Work-by-Inclusion” took the development of the technology one step further: The researchers have realized a complete system for the inclusion of hearing-impaired individuals at logistics operation.

BENEFITS FOR THOSE WITH AND WITHOUT HEARING IMPAIRMENTS

“We wanted to achieve inclusion with the system,” says Günthner. “The system was intended for those both with and without hearing impairments.” The scientists conducted a large number of surveys in order to incorporate employee needs and suggestions in development.

Thus for example it turned out that information is more easily understood when it is enhanced with symbols rather than with a lot of text. It was also necessary to adjust the frames of the data glasses to fit individually so that the user was not disturbed by the glasses. “We also implemented several additional functions. Thus for example it’s possible to exchange pre-formulated text messages with others. This created a non-vocal communication platform,” explains Matthias vom Stein, research assistant at the Institute.

SYSTEM IS TRANSFERRABLE TO OTHER APPLICATIONS

The system developed includes the data glasses, on which the picking app is installed, a hand scanner for reading the barcodes of the goods as well as warehouse management software. “We’ve defined an open interface to the picking app based on Android,” explains vom Stein. This means the system can also be used by other companies or institutes. Another advantage: The software can also be used with future data glasses, as long as the glasses use an Android operating system.

The office product vendor Schmaus has been using the complete system since the end of 2017. “The hearing-impaired employees are completely thrilled, because now they’re simply another part of the entire team,” says vom Stein. “We really enjoyed the project, especially because the people there were so enthusiastic.”

The project was supported by the German Federal Ministry of Labor and Social Affairs. The partners were Schmaus GmbH and the software company CIM GmbH.