Brown University engineers have devised a way to focus terahertz radiation using an array of stacked metal plates, which may prove useful for terahertz imaging or in next-generation data networks.

Terahertz radiation is a relatively unexplored slice of the electromagnetic spectrum, but it holds the promise of countless new imaging applications as well as wireless communication networks with extremely high bandwidth. The problem is that there are few off-the-shelf components available for manipulating terahertz waves. 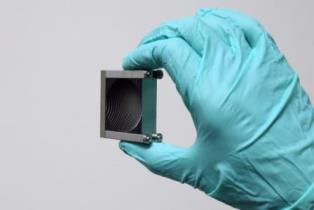 Now, researchers from Brown University’s School of Engineering have developed a new type of lens for focusing terahertz radiation (which spans from about 100 to 10,000 GHz). The lens, made from an array of stacked metal plates with spaces between them, performs as well or better than existing terahertz lenses, and the architecture used to build the device could set the stage for a range of other terahertz components that don’t currently exist.

“Any photonic system that uses terahertz – whether it’s in imaging, wireless communications or something else – will require lenses,” said Dan Mittleman, professor of engineering at Brown and the senior author on the new paper. “We wanted to look for new ways to focus terahertz radiation.”

Most lenses use the refractive properties of a material to focus light energy. Eyeglasses, for example, use convex glass to bend visible light and focus it on a certain spot. But for this new terahertz lens, the properties of the materials used don’t matter as much as the way in which the materials are arranged.

The new device is made from 32 metal plates, each 100 microns thick, with a 1-millimeter space between each plate. The plates have semicircular notches of different sizes cut out of one edge, such that when stacked horizontally the notches form a three-dimensional divot on one side of the device. When a terahertz beam enters the input side of the device, slices of the beam travel through the spaces between the plates. The concave output side of the device bends the beam slices to varying degrees such that the slices are all focused on a certain point.

Using the configuration developed for this new study, the researchers were able to focus a two-centimeter-diameter terahertz beam down to a four-millimeter spot. The radiation transmission through the device – the amount of radiation that makes it through the spaces as opposed to reflected back toward the source or dissipated inside the device – was about 80 percent. That’s significantly better than silicon lenses, which typically have a transmission loss of about 50 percent, and about the same as lenses made from Teflon.

The new device has some advantages over existing Teflon lenses, however. In particular, by changing the spacing between the plates, the new device can be calibrated for specific terahertz wavelengths, something that isn’t possible with existing lenses.

“That can be particularly interesting if you want to image things at one frequency and not at others,” Mittleman said. “One of the important things here is that this design offers you a versatility that a simple chunk of plastic with a curved surface doesn’t offer.”

The work also suggests that the technique of using spaced metal plates to manipulate terahertz radiation could be useful in making other types of components that currently don’t exist. Since a metallic architecture mimics a plastic (a dielectric), this material technology is called “artificial dielectrics.”

“As much as anything else, this paper proves that the technology is feasible,” Mittleman said. “Now we can go and make devices that are totally new in the terahertz world.”

The same technology could be used, Mendis said, to make a polarizing beam splitter for terahertz waves – a device that separates waves according to their polarization state. Such a device could be used to implement elementary logic gates for terahertz photonic systems, where the binary (one and zero) logic states are assigned to the two polarization states. That would be an essential component of a terahertz data network.

“The spirit of this work is to develop a new technology for building terahertz components that might be alternatives to things that exist or that might be new,” Mittleman said. “That’s important for the terahertz field because there aren’t a lot of off-the-shelf components yet.”

Other authors on the paper were Masaya Nagai (professor at Osaka University in Japan), Yiqiu Wang (undergraduate student at Rice University) and Nicholas Karl (doctoral student at Brown).

The study was funded by the National Science Foundation and the Keck Foundation.