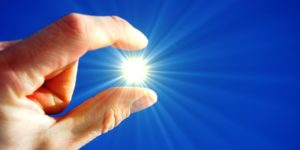 The new device is made of perovskite-silicon tandem solar cells integrated with specially designed chemical battery components. The solar-flow battery achieved a new record efficiency of 20 percent conversion of energy from the sun. This is 40 percent more efficient than the previous record for solar-flow batteries, which were also developed in the University of Wisconsin Jin lab where lead author, PhD student Wenjie Li, is based.

This work is published today in the journal Nature Materials and is a collaboration between UW-Madison, Utah State University, King Abdullah University of Science and Technology in Saudi Arabia, the City University of Hong Kong, UNSW and the University of Sydney.

The researchers turned to an increasingly popular material for photovoltaic cells, halide perovskites, and combined them with silicon solar cells to increase their efficiency by capturing more energy from the sun.

Professor Anita Ho-Baillie at the University of Sydney Nano Institute and postdoctoral researcher Dr Jianghui Zheng at UNSW designed and fabricated the perovskite-silicon tandem solar cells so that they can maintain their performance and stability while withstanding the chemicals in a flow battery.

This research could potentially yield a new way to harvest, store and use the sun’s energy for solar home systems.

This work was supported in part by the US National Science Foundation and Australian Renewable Energy Agency (ARENA). Other funding agencies include King Abdullah University of Science and Technology (KAUST); China Scholarship Council (CSC).