In 2015, the share of energy from renewable sources in gross final consumption of energy reached 16.7% in the European Union (EU), nearly double 2004 (8.5%), the first year for which the data are available.

The share of renewables in gross final consumption of energy is one of the headline indicators of the Europe 2020 strategy. The target to be reached by 2020 for the EU is a share of 20% energy from renewable sources in gross final consumption of energy. However, renewables will continue to play a key role in helping the EU meet its energy needs beyond 2020. For this reason, Member States have already agreed on a new EU renewable energy target of at least 27% by 2030.

Highest share of renewables in Sweden, lowest in Luxembourg, Malta and the Netherlands

Since 2004, the share of renewable sources in gross final consumption of energy grew significantly in all Member States. Compared with a year ago, it has increased in 22 of the 28 Member States.

The Netherlands and France: furthest away from their goals

Each EU Member State has its own Europe 2020 target. The national targets take into account the Member States’ different starting points, renewable energy potential and economic performance. Among the 28 EU Member States, eleven have already reached the level required to meet their national 2020 targets: Bulgaria, the Czech Republic, Denmark, Estonia, Croatia, Italy, Lithuania, Hungary, Romania, Finland and Sweden. Moreover, Austria and Slovakia are about 1 percentage point from their 2020 targets. At the opposite end of the scale, the Netherlands (8.2 percentage points from reaching its national 2020 objective), France (7.8 pp), Ireland and the United Kingdom (both 6.8 pp) and Luxembourg (6.0 pp) are the furthest away from their targets. 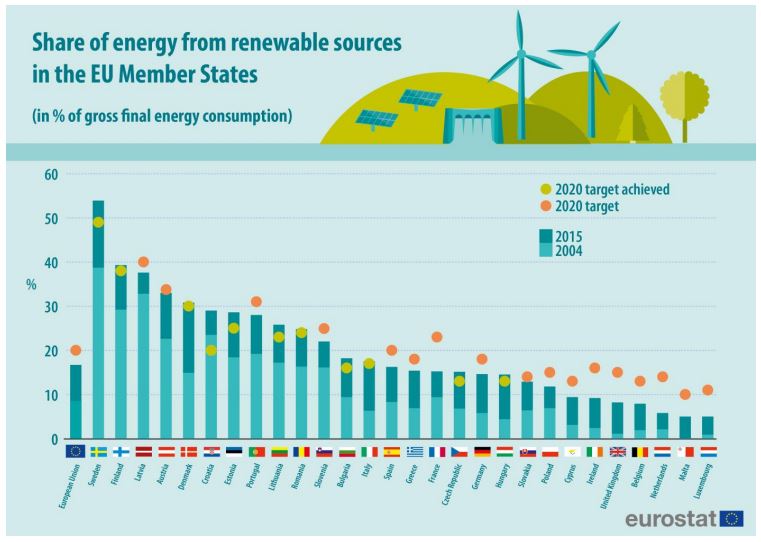 These figures come from an article issued by Eurostat, the statistical office of the European Union.

Renewable energy sources cover solar thermal and photovoltaic energy, hydro (including tide, wave and ocean energy), wind, geothermal energy and all forms of biomass (including biological waste and liquid biofuels). The contribution of renewable energy from heat pumps is also covered for the Member States for which this information was reported. The renewable energy delivered to final consumers (industry, transport, households, services including public services, agriculture, forestry and fisheries) is the numerator of this indicator. The denominator, the gross final energy consumption of all energy sources, covers total energy delivered for energy purposes to final consumers as well as the transmission and distribution losses for electricity and heat. It should be noted that exports/imports of electricity are not considered as renewable energy unless a specific intergovernmental agreement has been signed (currently only between Sweden and Norway).

The national shares of energy from renewable sources in gross final consumption of energy are calculated according to specific calculation provisions of Directive 2009/28/EC on the promotion of the use of energy from renewable sources and Commission Decision 2013/114/EU establishing the guidelines for Member States on calculating renewable energy from heat pumps from different heat pump technologies. Electricity production from hydro power and wind power is accounted according to normalisation rules of Annex II of Directive 2009/28/EC. For data as of 2011, only biofuels and bioliquids declared by countries as compliant with criteria of sustainability as defined in Articles 17 and 18 of Directive 2009/28/EC are accounted towards the share of energy from renewable sources. Adjustments of energy consumption in aviation are applied for all countries according to Article 5(6). Statistical transfers and joint projects (Articles 6-11) reported to Eurostat are also considered in the presented data. More details on the calculation methodology applied by Eurostat can be found in the SHARES tool manual.