Depending on their applications, quantum dots need to be tailored in terms of their structure and properties. Chemists from Warsaw have shown that quantum dots obtained by their novel method can be successfully functionalized with modern click chemistry. This achievement is of interest not only due to the numerous potential applications, but also because in hitherto experiments copper compounds used as catalyst in click reactions have always destroyed the ability of quantum dots to emit light.

Unique optical features of quantum dots make them an attractive tool for many applications, from cutting-edge displays to medical imaging. Physical, chemical or biological properties of quantum dots must, however, be adapted to the desired needs. Unfortunately, up to now quantum dots prepared by chemical methods could be functionalized using copper-based click reactions with retention of their luminescence. This obstacle can be ascribed to the fact that copper ions destroy the ability of quantum dots to emit light. Scientists from the Institute of Physical Chemistry of the Polish Academy of Sciences (IPC PAS) in Warsaw and the Faculty of Chemistry of the Warsaw University of Technology (FC WUT) have shown, however, that zinc oxide (ZnO) quantum dots prepared by an original method developed by them, after modification by the click reaction with the participation of copper ions, fully retain their ability to emit light. 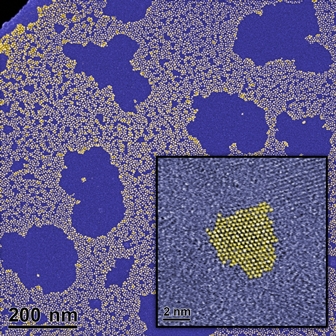 Images of ZnO quantum dots prepared by the Institute of Physical Chemistry of the Polish Academy of Sciences in Warsaw, taken by transmission electron microscopy. False colors. (Source: IPC PAS)

“Click reactions catalyzed by copper cations have long attracted the attention of chemists dealing with quantum dots. The experimental results, however, were disappointing: after modification, the luminescence was so poor that they were just not fit for use. We were the first to demonstrate that it is possible to produce quantum dots from organometallic precursors in a way they do not lose their valuable optical properties after being subjected to copper-catalysed click reactions,” says Prof. Janusz Lewinski (IPC PAS, FC WUT).

Quantum dots are crystalline structures with size of a few nanometers (billionth parts of a meter). As semiconductor materials, they exhibit a variety of interesting features typical of quantum objects, including absorbing and emitting radiation of only a strictly defined energy. Since atoms interact with light in a similar way, quantum dots are often called artificial atoms. In some respects, however, quantum dots offer more possibilities than atoms. Optical properties of each dot actually depend on its size and the type of material from which it is formed. This means that quantum dots may be precisely designed for specific applications.

To meet the need of specific applications, quantum dots have to be tailored in terms of physicochemical properties. For this purpose, chemical molecules with suitable characteristics are attached to their surface. Due to the simplicity, efficacy, and speed of the process, an exceptionally convenient method is the click reaction. Unfortunately, one of the most widely used click reactions takes place with the participation of copper ions, which was reported to result in the almost complete quenching of the luminescence of the quantum dots.

“Failure is usually a result of the inadequate quality of quantum dots, which is determined by the synthesis method. Currently, ZnO dots are mainly produced by the sol-gel method from inorganic precursors. Quantum dots generated in this manner are coated with a heterogeneous and probably leaky protective shell, made of various sorts of chemical molecules. During a click reaction, the copper ions are in direct contact with the surface of quantum dots and quench the luminescence of the dot, which becomes completely useless,” explains Dr. Agnieszka Grala (IPC PAS), the first author of the article in the Chemical Communications journal.

For several years, Prof. Lewinski’s team has been developing alternative methods for the preparation of high quality ZnO quantum dots. The method presented in this paper affords the quantum dots derived from organozinc precursors. Composition of the nanoparticles can be programmed at the stage of precursors preparation, which makes it possible to precisely control the character of their organic-inorganic interface. 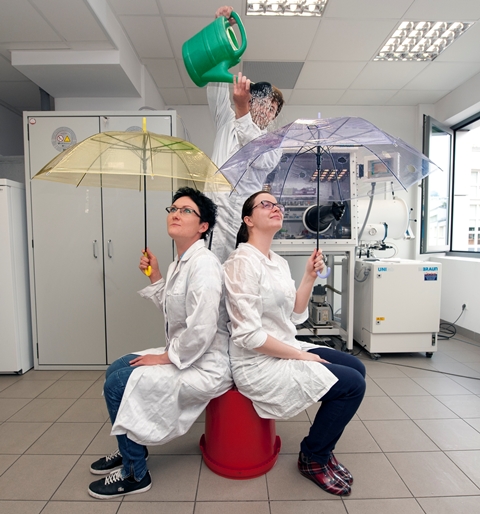 “Nanoparticles produced by our method are crystalline and all have almost the same size. They are spherical and have characteristics of typical quantum dots. Every nanoparticle is stabilized by an impermeable protective jacket, built of organic compounds, strongly anchored on the surface of the semiconductor core. As a result, our quantum dots remain stable for a long time and do not aggregate, that is clump together, in solutions,” describes Malgorzata Wolska-Pietkiewicz, a PhD student at FC WUT.

“The key to success is producing a uniform stabilizing shell. Such coatings are characteristic of the ZnO quantum dots obtained by our method. The organic layer behaves as a tight protective umbrella protecting dots from direct influence of the copper ions,” says Dr. Grala and clarifies: “We carried out click reaction known as alkyne-azide cycloaddition, in which we used a copper(l) compound as catalysts. After functionalization, our quantum dots shone as brightly as at the beginning.”

Quantum dots keep finding more and more applications in various industrial processes and as nanomarkers in, among others, biology and medicine, where they are combined with biologically active molecules. Nanoobjects functionalized in this manner are used to label both individual cells as well as whole tissues. The unique properties of quantum dots also enable long-term monitoring of the labelled item. Commonly used quantum dots, however, contain toxic heavy metals, including cadmium. In addition, they clump together in solutions, which supports the thesis of the lack of tightness of their shells. Meanwhile, the ZnO dots produced by Prof. Lewinski’s group are nontoxic, they do not aggregate, and can be bound to many chemical compounds – so they are much more suitable for medical diagnosis and for imaging cells and tissues.

Research on the methods of production of functionalized ZnO quantum dots was carried out under an OPUS grant from the Poland’s National Science Centre.

The Institute of Physical Chemistry of the Polish Academy of Sciences (http://www.ichf.edu.pl/) was established in 1955 as one of the first chemical institutes of the PAS. The Institute’s scientific profile is strongly related to the newest global trends in the development of physical chemistry and chemical physics. Scientific research is conducted in nine scientific departments. CHEMIPAN R&D Laboratories, operating as part of the Institute, implement, produce and commercialise specialist chemicals to be used, in particular, in agriculture and pharmaceutical industry. The Institute publishes approximately 200 original research papers annually.

Source: The Institute of Physical Chemistry of the Polish Academy of Sciences