Scientists have given a fascinating new insight into the next steps to develop fast, energy-efficient, future computing systems that use light instead of electrons to process and store information – incorporating hardware inspired directly by the functioning of the human brain. 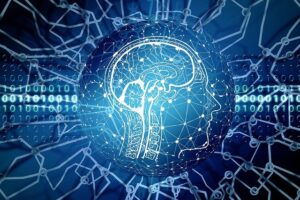 A team of scientists, including Professor C. David Wright from the University of Exeter, has explored the future potential for computer systems by using photonics in place of conventional electronics.

The article is published today (January 29th 2021) in the prestigious journal Nature Photonics.

The study focuses on potential solutions to one of the world’s most pressing computing problems – how to develop computing technologies to process this data in a fast and energy efficient way.

Contemporary computers are based on the von Neumann architecture in which the fast Central Processing Unit (CPU) is physically separated from the much slower program and data memory.

This means computing speed is limited and power is wasted by the need to continuously transfer data to and from the memory and processor over bandwidth-limited and energy-inefficient electrical interconnects – known as the von Neumann bottleneck.

As a result, it has been estimated that more than 50 % of the power of modern computing systems is wasted simply in this moving around of data.

Professor C David Wright, from the University of Exeter’s Department of Engineering, and one of the co-authors of the study explains “Clearly, a new approach is needed – one that can fuse together the core information processing tasks of computing and memory, one that can incorporate directly in hardware the ability to learn, adapt and evolve, and one that does away with energy-sapping and speed-limiting electrical interconnects.”

Photonic neuromorphic computing is one such approach. Here, signals are communicated and processed using light rather than electrons, giving access to much higher bandwidths (processor speeds) and vastly reducing energy losses.

Moreover, the researchers try to make the computing hardware itself isomorphic with biological processing system (brains), by developing devices to directly mimic the basic functions of brain neurons and synapses, then connecting these together in networks that can offer fast, parallelised, adaptive processing for artificial intelligence and machine learning applications.

The state-of-the-art of such photonic ‘brain-like’ computing, and its likely future development, is the focus of an article entitled “Photonics for artificial intelligence and neuromorphic computing” published in the prestigious journal Nature Photonics by a leading international team of researchers from the USA, Germany and UK.