In recent years, we’ve heard a lot about “news bubbles” and “echo chambers,” the idea that to validate their own worldviews, liberals read liberal news and conservatives read conservative news. The proliferation of partisan online news sites, the thinking goes, only makes it worse. Numerous studies have supported these ideas. However, they all have one thing in common: They don’t take into account the news people read on their mobile devices. 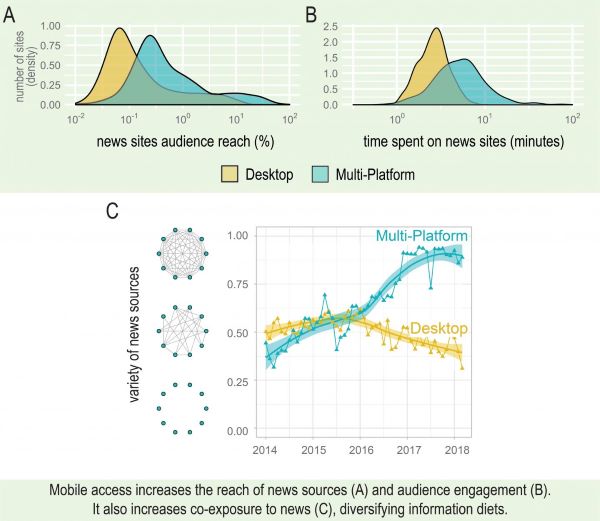 In a new study published in the Proceedings of the National Academy of Sciences, researchers at the University of Pennsylvania’s Annenberg School for Communication analyzed the news consumption of tens of thousands of Americans over a five-year period on their desktop computers, tablets, and mobile phones. They found that contrary to the conventional wisdom about segregated news bubbles, mobile devices expose Americans to a much greater variety of news, diversifying the stories that people encounter and exposing them to a breadth of information sources.

In an era where mobile phones are increasingly the gateway to the internet for the majority worldwide, this insight into mobile news exposure is an encouraging sign.

“Given our observation that echo chambers are not as significant as many assume they are, our data suggest that Americans might still be willing to hear from the other side,” says lead author Tian Yang, an Annenberg School for Communication doctoral candidate. “Also, getting information from a diverse pool of news sources might help reduce the effects of misinformation, a major concern in the current information environment.”

The study shows that exposure to news through desktop computers has resulted in people reading from a narrower set of sources over time. But when the analysis takes into account the full range of devices on which people access the internet, including mobile phones, a picture emerges in which Americans encounter a much wider range of news sources, exposure that is largely not dictated by partisan beliefs. On average, the political ideology of news audiences only counted for 16% of the variation in their exposure to news outlets.

“Our results are counterintuitive because we are taking into account a large percentage of the online population that is often excluded from the data,” says senior author Sandra González-Bailón, associate professor of communication at the Annenberg School for Communication. “Examining mobile phone usage totally changes the picture of how people encounter information online.”

The researchers theorize that the structure of mobile apps, news aggregators, and social media networks lead people to click on stories on a variety of sites that they might not otherwise visit.

While the data paint a pro-democratic picture of a broadly informed electorate, there was another, less optimistic finding: Half of Americans who are online do not read news on any of their digital devices. While we think about Americans as split between two news bubbles, in fact half of the U.S. population is opting out of online news altogether.

“What this tells us is that the left-right ideological divide may be less important than the divide between those who are informed and those who are not,” says González-Bailón. “And this finding matters because news-avoiders are likely to be more vulnerable to misinformation and manipulation, and we have to do more to research that.”

In addition to Yang and González-Bailón, co-authors on the study include Silvia Majó-Vázquez and Rasmus K. Nielsen, both of University of Oxford. The research, completed while González-Bailón was on sabbatical leave at the Center for Advanced Study in the Behavioral Sciences at Stanford University, was funded by National Science Foundation grant #1729412.