The hype around hydrogen fuel cells has died down, but scientists have continued to pursue new technologies that could enable such devices to gain a firmer foothold. Now one team has developed an electrocatalyst to replace the currently dominant, but expensive, one of choice — platinum — that could help boost the fledgling fuel-cell industry. 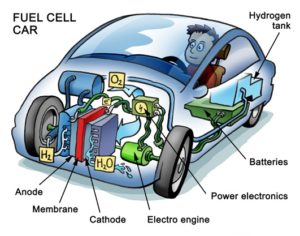 Fuel cells generate power by directly converting chemical energy into electricity. Putting hydrogen fuel cells, which only release water and electricity, into vehicles has been touted as a way to shift transportation toward a cleaner future. One of the obstacles to wide-scale commercialization, however, has been the use of costly platinum-based alloys as the electrocatalyst in proton exchange membrane fuel cells (PEMFCs), the type currently favored for practical applications. James M. Tour, Juncai Dong, Boris I. Yakobson, Emilie Ringe and colleagues set out to find an alternative.

The researchers developed an electrocatalyst using less expensive ruthenium and nitrogen-doped graphene. It showed promise for use in PEMFCs with an onset potential of 0.89 volts, which is comparable to platinum-based electrocatalysts. Some traits, including durability, were even better suited for this application than platinum counterparts. The researchers say that the atomic dispersion of ruthenium on nitrogen-doped graphene could significantly improve the use of metal active components, and also reduce the amount of noble-metal usage. Their findings could also help clear the path toward more practical fuel cells.

The authors acknowledge funding from the U.S. Air Force Office of Scientific Research, the China Scholarship Council, the American Chemical Society Petroleum Research Fund, the U.S. Department of Energy, the Welch Foundation, the National Natural Science Foundation of China, and the Institute of High Energy Physics (Chinese Academy of Sciences).

Their report appears in the journal ACS Nano.

The American Chemical Society is a not-for-profit organization chartered by the U.S. Congress. ACS is the world’s largest scientific society and a global leader in providing access to chemistry-related research through its multiple databases, peer-reviewed journals and scientific conferences. ACS does not conduct research, but publishes and publicizes peer-reviewed scientific studies. Its main offices are in Washington, D.C., and Columbus, Ohio.