Panasonic Corporation installed an Integrated AV solution at UNESCO Headquarters in Paris, France based on a project agreement between Panasonic and UNESCO.

The AV equipment package was installed in Room 1, which is the largest conference room at UNESCO Headquarters. This room seats approximately 1,000 people and is used for hosting international conferences. VIPs from around the world, such as prime ministers and secretary of state officials, gather in Room1 to discuss about global topics. This renovation of Room1 was implemented on the occasion of UNESCO’s 70th anniversary. 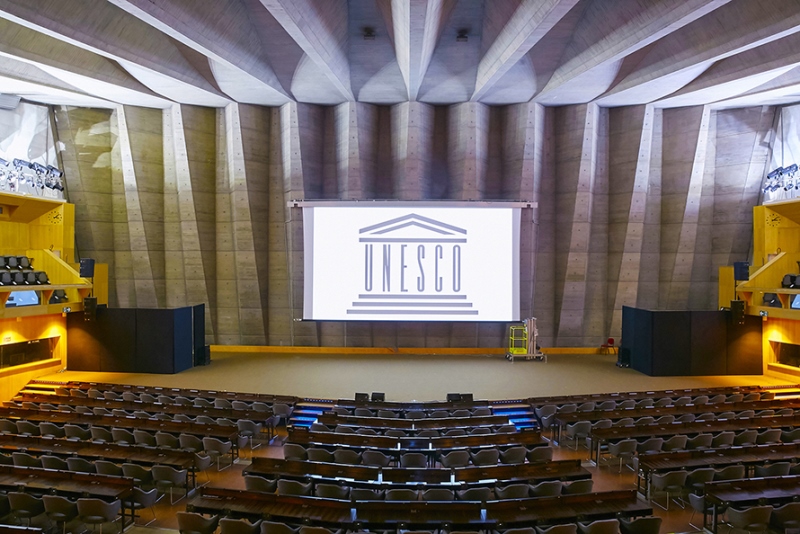 The main AV equipment installed in Room1 was as follows:

The installation of the above and all other AV equipment was completed in January 2016.

“We are now able to organize many international events and cultural performances that we can either record or broadcast live towards different media services such as HD web streaming and TV channels. It is a great pleasure for us to work with the new equipment that includes video mixer and recorder, cameras and a camera controller and allows us to record and broadcast with only one technician”

Partnership between Panasonic and UNESCO

In the field of ‘education for the next generation’, Panasonic hosted the ‘World Heritage Eco Learning Program’. This program, a collaboration between Panasonic, the UNESCO World Heritage Centre and selected World Heritage sites, offered children the opportunity to visit world heritage sites around the world and learn about UNESCO’s work. Since 2008, approximately 4,500 children from 16 countries at 23 cites took part in this program.

In addition, Panasonic also held the ‘Eco Diary Picture Contest’, where children introduce their own unique global environment conservation in the form of a picture diary. The global contest award ceremony was held twice at UNESCO Headquarters. Since 2008, approximately 970,000 children from 51 countries participated in the contest.

In the field of ‘communication’, Panasonic worked in partnership with the National Geographic Channel to present a World Heritage-focused television program called ‘THE WORLD HERITAGE SPECIAL’. The program was broadcasted in 193 countries around the world.

In the field of ‘technological support’, Panasonic supplied its audio visual systems, such as its High Definition Video Communication system, and other AV equipment to UNESCO Headquarters. In addition, Panasonic established a project to replace incandescent light bulbs with energy-saving LED lights at World Heritage sites worldwide. World Heritage sites which now use LED lights include Kiyomizu Temple in Kyoto, Japan and the Hradcani Castle in Prague, Czech Republic.

Through the World Heritage Calendar, Panasonic and UNESCO will continue to contribute to the understanding of conservation of World Heritage sites as well as to the education of the next generation.