More than 500,000 pieces of manmade space debris—including spent rocket stages, defunct satellites, and fragments as small as flecks of paint—currently hurtle around the Earth at roughly 17,000 miles per hour. At those speeds, impacts involving even the smallest of those items can damage satellites and spawn chain reactions of collisions, increasing the amount of orbital flotsam and creating “minefields” in space that can remain unpassable for centuries. Tracking debris is thus essential—not just to protect existing commercial and government satellites but also to ensure that paths to critical locations in low Earth orbit (LEO), geosynchronous orbit, and orbits in between stay clear and safe for future space assets.

Debris tracking requires knowing the location and behavior of space objects through persistent monitoring of the satellite population from as many sensor sources as possible. The historical steward of this responsibility has been the U.S. Air Force, which operates the United States Space Surveillance Network (SSN), a worldwide network of 29 military radar and optical telescopes. Over the last few years, the growing commercial space community has developed its own cost-effective networks incorporating hundreds of different sensors. These networks and the SSN cannot easily or quickly share data with each other, however, because such sharing requires manual fusion of data in different formats. Additionally, the SSN can accept data collected only from certified, high-accuracy sensors. 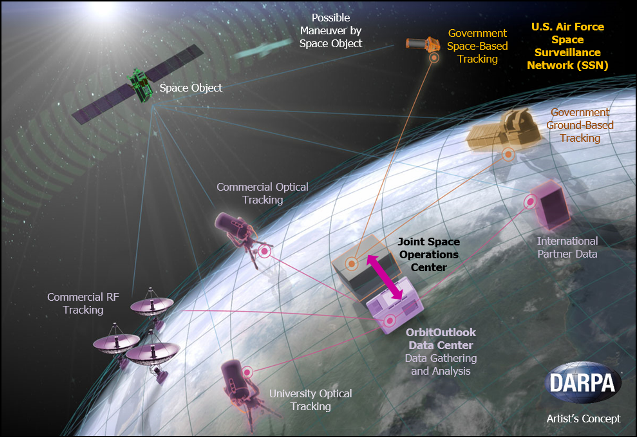 Providing a way for all these networks to quickly acquire and process large amounts of high-quality data from diverse sources—including civil, commercial, academic, and international partners—would enable everyone monitoring space debris to better understand the quickly evolving space environment and evaluate when satellites are at risk. DARPA’s OrbitOutlook (O2) program is working toward that capability to improve overall space safety. This month, the program completed integration of live data feeds from seven space situational awareness (SSA) data providers that together have more than 100 sensors around the world—the largest and most diverse network of space situational awareness networks ever assembled. DARPA will soon start testing scalable, automated algorithms on this integrated feed, in an effort to identify and extract relevant data that SSA experts could use to make decisions in near real time.

“By including new telescopes and radar facilities based in diverse locales, and by revolutionizing how we process different data types, we anticipate vast improvements in our tracking of potentially hazardous objects and our ability to efficiently avoid collisions in space,” said Lt. Col. Jeremy Raley, DARPA program manager. “If we’re successful, OrbitOutlook could revolutionize how the U.S. military and the global space-debris-monitoring community collect and use space situational awareness data, through a framework based on partnerships and fee-for-service arrangements that would enable all parties to share and purchase data from hundreds of sensors. Not only could we double or triple the amount of useful data, but we could also generate indications and warnings in hours instead of weeks and provide orders-of-magnitude improvements in accuracy and affordability.”

Four of the seven data providers are networks that DARPA has developed to integrate SSA data from specific communities of interest:

Three commercial and government networks are providing data on a fee-for-service basis:

DARPA will be testing algorithms designed to validate the quality of diverse data sets from non-certified SSA sensors in real time and determine if those data sets contain information that human experts can confidently use. If successful, the algorithms will monitor multiple sensors’ position estimates to dynamically detect and compensate for any corrupted or inaccurate measurements. Performance feedback will be provided to sources deemed inaccurate to inform corrective action. These algorithms also reduce the burden on data providers by translating their data from its native format into the official O2 format.

The algorithms are part of the OrbitOutlook data archive, which stores both the observation data received from sensors and the processed data that the algorithms produce. DARPA can rapidly reconfigure the archive’s data storage as needed to facilitate the algorithms’ ability to query and index the enormous and ever-growing data sets the networks provide.

The archive and the algorithms reside in a sophisticated data center based on one developed by DARPA’s Insight program, which aims to create an adaptable, integrated systems for intelligence, surveillance, and reconnaissance (ISR) information to augment intelligence analysts’ support of time-sensitive operations on the battlefield. OrbitOutlook’s custom facility uses a specialized world model for space situational awareness.

Algorithm testing on real data is scheduled to begin in fall 2016. Upon successful demonstration of the algorithms, DARPA intends to share them and the data archive with the broader space-debris-tracking community through the DARPA Open Catalog. The Agency would then transition the O2 network to one or more stakeholders in the SSA community, such as the Air Force, NASA, the Federal Aviation Administration (FAA), industry, and other U.S. Government agencies. DARPA also intends to use OrbitOutlook’s products and technologies in the Agency’s Hallmark program, which has the overarching goal to provide breakthrough capabilities in U.S. space enterprise command and control.