For the first time in the field of solid-state chemistry scientists at NYU Abu Dhabi have developed a smart crystal that can heal itself after breakage without any chemical or biological intervention. The crystal relies on its own molecular structure and physical contact to heal — similar to cuts on skin.

Self-healing polymers has been researched by chemists extensively for more than a decade and until now has only been observed in softer materials like rubber and plastic. 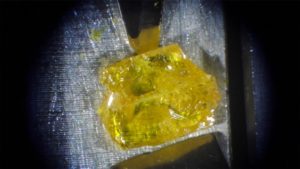 A still frame from a video shows a dipyrazolethiuram disulfide crystal, that has been adhered to silicone pads, right before it is broken in half. Dr. Patrick Commins/ NYU Abu Dhabi

Pale yellow crystals the size of a baby’s fingernail — and about 0.5 mm thick — were grown in a lab by Dr. Patrick Commins, postdoctoral associate researcher at NYU Abu Dhabi and lead author of the research paper recently published in leading peer-reviewed scientific journal Angwandte Chemie International Edition. The two-year study was conducted on dipyrazolethiuram disulfide crystals.

Commin said his research was inspired by the relationship between sulphur atoms in soft polymers, which tend to flow toward neighbouring sulphur atoms and bond with them easily resulting in self-repair. He decided to test the same bond in crystals.

“What happens when we break the crystal is that we have all these sulphurs moving around and when we press them together they reform their bonds and they heal,” Commins explained.

Commins said the crystal was broken using a machine built specifically to hold tiny objects and that has the capability to break the object cleanly. The two halves of the broken crystal were mechanically brought into contact with each other at room temperature. 24 hours later the crystal was whole again healed. The only defect was a superficial mark left behind by the crack in the middle. The percentage of healing was 6.7 percent and was calculated by comparing the amount of force required to break the crystal before and after the healing process.

“This is actually a small breakthrough because it kind of shows a concept that was not considered possible before,” said Dr. Pance Naumov, NYU Abu Dhabi associate professor of chemistry and study co-author. “It is the first time we’ve observed that rigid entities like crystals can self-repair. This was not expected. It’s certainly a shift in our understanding of crystals.”

“Crystals found in nature are made from minerals, like calcium and silicates but this crystal is different,” Commins added. “The crystal has been made specifically to have many close sulfur-sulfur bonds and they grow in rather small sizes.”

Commins believes this research is just the beginning.

“We think other crystals can do it (self-heal) but no one has actually explored it. We’ve only investigated one aspect of this field. We are expanding upon the subject and are trying to find other self-healing crystals,” he said.

Dr. Hideyuki Hara, research scientist at Bruker in Japan, is also a co-author on the paper.

NYU Abu Dhabi consists of a highly selective liberal arts and science college (including engineering), and a world center for advanced research and scholarship — all fully integrated with each other and connected to NYU in New York. Together, NYU New York, NYU Abu Dhabi, and NYU Shanghai form the backbone of a unique global network university, with faculty and students from each campus spending “semesters away” at one or more of the numerous study-abroad sites NYU maintains on six continents.