In a partnership that could change the lives of millions of people, NuEyes, a pioneer in the field of low-vision technology, and Osterhout Design Group (ODG), maker of the world’s most advanced Augmented Reality (AR) smartglasses, today announced the availability of portable head-worn devices that can re-open the wearer’s eyes to a world they believed forever lost due to failing sight. [crp]

Thanks to the pairing of NuEyes’ lenses and proprietary software with ODG’s awardwinning R-7 smartglasses, people suffering from macular degeneration, glaucoma, retinitis pigmentosa, and other vision-robbing conditions, will once again be able to read, drive, watch movies, play games or re-engage with loved ones. The smartglasses, available through NuEyes, are now shipping to customers. 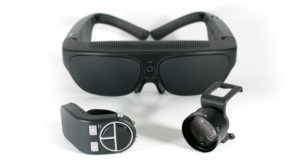 “This has the opportunity to transform lives,” said Pete Jameson, ODG’s chief operating officer. “Put yourself in the shoes of someone who has had to let go of many of their favorite and necessary activities due to poor sight. It puts you on the sidelines of life and imprisons you in your home. But these smartglasses empower people to do what they used to do. It’s really all about giving people their independence back.”

“Think of the impact of this innovation,” said Mark Greget, NuEyes founder and CEO. “It will help our economy by allowing people to work who previously couldn’t. It will give retirees a new lease on life. And it will be a boon for veterans, who may have the cost completely covered under their health-care plan, if approved.”

Technological innovation in visual aids has been stagnant over the last 40 years. While devices exist that can show written materials’ type on a larger screen for easier readability, they lack portability and are useless for recognizing faces at a party or watching a sporting event.

But NuEyes found an ideal technological partner in ODG, which has been specializing in head-worn electronics since 2009. The R-7 has the processing horsepower to smoothly deliver clear visuals while remaining comfortable for users. The smartglasses are voice-activated, battery-powered and feature 3D stereoscopic ultra-transparent HD displays, high-speed wireless connectivity and high-performance positional sensors. They come equipped with a camera on the bridge, between the wearer’s eyes, that can shoot at a 1080p resolution at 60 frames per second. NuEyes has improved upon that platform by projecting the enhanced and enlarged images captured by the camera on the inside of the glasses’ lenses. The result is, to put it mildly, eye-opening.

“I have several patients who have been waiting for this technology for a long time,” said Michael Samuel, M.D., a retina specialist at the Retina Institute of California. “Macular degeneration is the number one cause of blindness in this country, and patients that have end-stage macular degeneration are really the ones that are struggling the most. They’re the ones who are really looking for technology.”

At the recent Consumer Electronics Show 2016, the NuEyes smartglasses were honored as a winner in the CEA Foundation’s inaugural “technology that improves lives” video contest. Also at the show, ODG’s R-7 line topped all other products in the tablets, e-readers and mobile computing category.

San Francisco based Osterhout Design Group (ODG) was founded in 1999 as a technology incubator and today is focused on revolutionizing wearable technologies and developing innovative and sophisticated situational awareness, security and firstresponder solutions for government, enterprise and ultimately, consumer markets. The company is privately held and has over 80 employees.

NuEyes is veteran owned business dedicated to serving the technology needs of the visually impaired. Based in Orange County, CA, NuEyes is excited to bring such an advanced product to market that will leap frog the technology is currently available for someone dealing with legal blindness. With the leadership of NuEyes having over 13 years of combined experience in this space, we understand what it takes to successfully bring a new product to market. NuEyes is disrupting this industry by offering a product that can easily be dispensed through the offices of eye care professionals as well as the traditional distribution network.