With the recent development of foldable mobile phone screens, research on foldable electronics has never been so intensive. One particularly useful application of the foldable technology is in solar panels.

Current solar cells are restricted to rigid, flat panels, which are difficult to store in large numbers and integrate into everyday appliances, including phones, windows, vehicles, or indoor devices. But, one problem prevents this formidable technology from breaking through: to be integrated into these items, solar cells need to be foldable, to bend at will repeatedly without breaking. Traditional conducting materials used in solar cells lack flexibility, creating a huge obstacle in developing fully foldable cells. 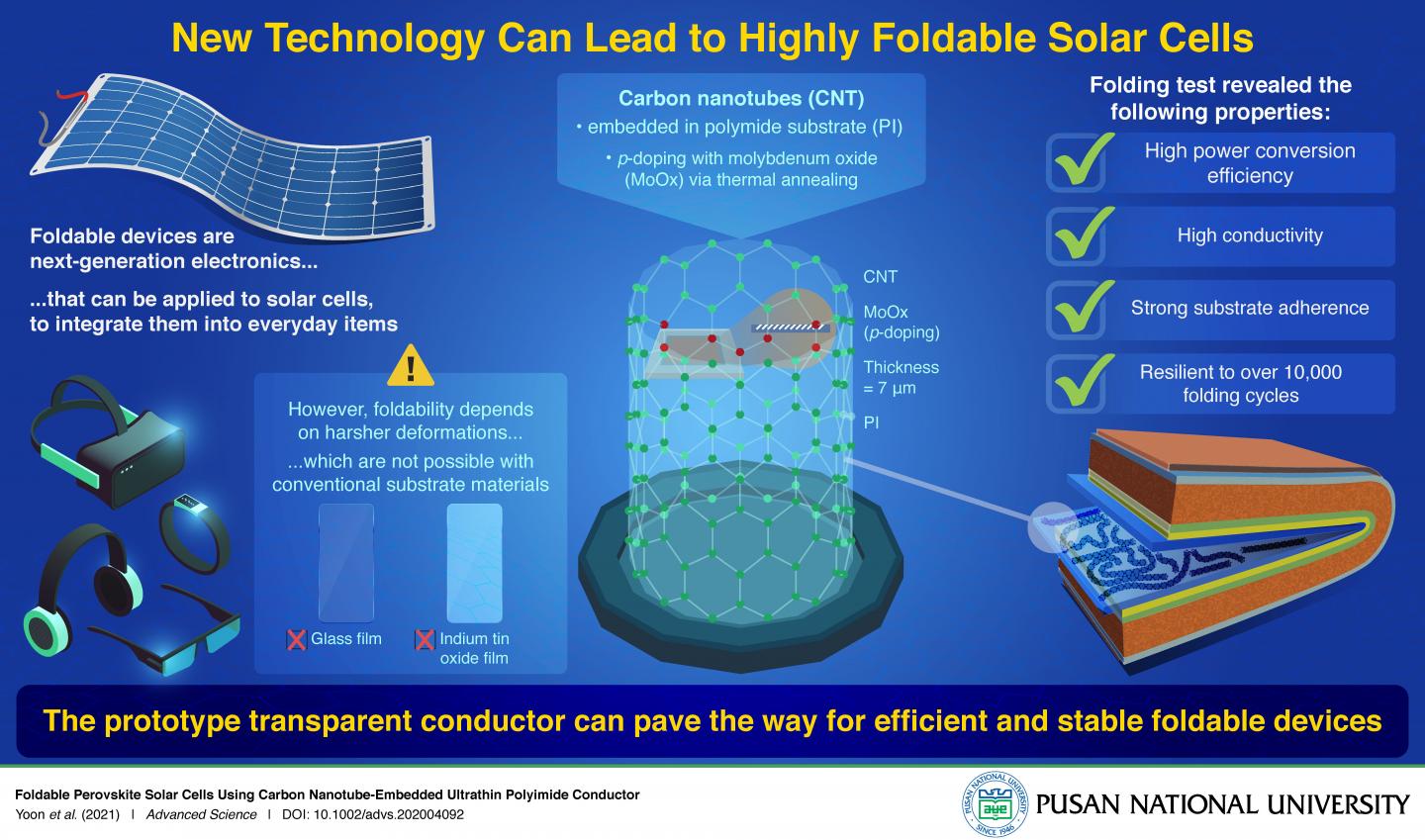 A key requirement for an efficient foldable conductor is the ability to withstand the pressure of bending within a very small radius while maintaining its integrity and other desirable properties. In short, a thin, flexible, transparent, and resilient conductor material is needed. Professor Il Jeon of Pusan National University, Korea, elaborates, “Unlike merely flexible electronics, foldable devices are subject to much harsher deformations, with folding radii as small as 0.5 mm. This is not possible with conventional ultra-thin glass substrates and metal oxide transparent conductors, which can be made flexible but never fully foldable.”

Fortunately, an international team of researchers, including Prof. Jeon, have found a solution, in a study published in Advanced Science. They identified a promising candidate to answer all of these requirements: single-walled carbon nanotube (SWNT) films, owing to their high transparency and mechanical resilience. The only problem is that SWNTs struggle to adhere to the substrate surface when force is applied (such as bending) and requires chemical doping. To address this problem, the scientists embedded the conducting layer into a polyimide (PI) substrate, filling the void spaces in the nanotubes.

To ensure maximum performance, they also “doped” the resulting material to increase its conductivity. By introducing small impurities (in this case, withdrawn electrons to molybdenum oxide) into the SWNT-PI nanocomposite layer, the energy needed for electrons to move across the structure is much smaller, and hence more charge can be generated for a given amount of current.

Their resulting prototype far exceeded the team’s expectations. Only 7 micrometers thick, the composite film exhibited exceptional resistance to bending, almost 80% transparency, and a power conversion efficiency of 15.2%, the most ever achieved in solar cells using carbon nanotube conductors! In fact, as pointed out by Prof. Jeon, “The obtained results are some of the best among those reported thus far for flexible solar cells, both in terms efficiency and mechanical stability.”

With this novel breakthrough in solar harvesting technology, one can only imagine what next-generation solar panels will look like.