Pedestrian safety at crosswalks is an area that needs immediate improvement, especially given that 52.9% of the pedestrian traffic accident deaths over the last 5 years occurred at crosswalks. It is difficult for motor vehicle drivers to promptly respond to the sudden appearance of pedestrians on roadways based on visual identification alone. Ensuring pedestrian safety is even more difficult in the case of children and the elderly, who may be limited in their ability to judge oncoming traffic, and at night, when visibility is low. Recently, there has been a rise in the number of traffic accidents involving pedestrians crossing the street while looking at their smartphones. In fact, a new term “phone-rani” (smartphone + gorani, which loosely translates as “deer in the headlights”) has been coined to describe such pedestrians. 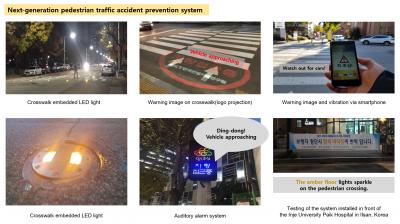 A research team led by Dr. Jong Hoon Kim at the KICT has developed a system to prevent pedestrian traffic accidents that notifies motor vehicle drivers of pedestrians, and also notifies pedestrians of oncoming traffic.

The system uses warning lights and electric signs to notify drivers of pedestrians in the crosswalk. When a thermal imaging camera, which is less sensitive to changes in intensity of illumination during day and night than other cameras and is excellent at identifying people and objects, recognizes a pedestrian approaching the crosswalk, high-intensity “Crosswalk embedded LED light,” which are embedded in the pavement on both sides of the crosswalk, are activated. These LED lights maintain a brightness level of 220 cd/?, which allows them to be seen from 50 m away but is not bright enough to disrupt a driver’s field of vision. When a vehicle gets within 30 m of the crosswalk, an electronic sign (VMS) blinks to alert the driver once again that a pedestrian is crossing.

In the result of testing approximately 1,000 vehicles at the system test site, it showed that 83.4% of vehicles, including those that came to a complete stop at the crosswalk, became aware of the pedestrian and reduced their speed. In roads where the speed limit is 50 km/h, as the vehicles were approaching to the crosswalk with pedestrians, the average speed of vehicles was reduced to 26.8 km/h indicating that the drivers were decelerating to just about half the speed limit. Compared to the average speed of 32 km/h of vehicles approaching the same crosswalk before the system was installed, the system assisted in reducing the average vehicle speed by nearly 20%.

The system also alerts pedestrians about approaching vehicles using a 3-way alarm system. When a vehicle traveling 10 km/h or faster is approaching the crosswalk, a projector (logojector) projects a warning image on the ground. An auditory alarm system goes off, and a smartphone application warns the user through the vibration and alarm notification. This 3-way warning system is expected to be especially effective for: the elderly, who often look down at the ground as they walk; children, who are less aware of oncoming traffic; and pedestrians who are on their smartphones.

Dr. Jong Hoon Kim of the KICT, who is in charge of the research project, commented on the system saying, “We expect outstanding results when the system is installed at crosswalks without traffic signals and crosswalks on rural highways, where the rate of pedestrian accidents is high. We intend to continue to develop the system, so that drivers can be notified of upcoming crossings via their navigation apps, and also vehicles can automatically slow down when dangerous circumstances are detected.” The technology was jointly developed by the KICT and ITS Bank Co., Ltd. (CEO Jong-sun Lee), a medium-sized enterprise in Goyang, Korea. Through the KICT’s partnership with the municipal government of Goyang (Mayor Jae-jun Lee) and the Ilsan Seobu Police Station (Chief Ik-hoon Lee), the system was installed in front of the Inje University Ilsan Paik Hospital where testing is currently underway.