Panasonic Corporation announced that it has recently developed the “HIT™ Photovoltaic Module for Automobile”, which was adopted for the new Prius PHV released in February 2017 by Toyota Motor Corporation (hereafter Toyota Motor).
In addition, Panasonic’s automotive prismatic lithium-ion batteries were adopted for the drive batteries, as with the Prius PHV that was released in 2012. 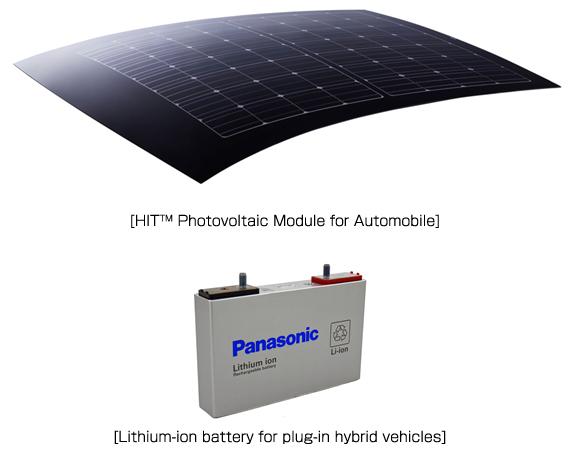 Panasonic Corporation has worked on the development of new applications of solar cells through the effective use of high performance and high reliability technologies and know-how that have been accumulated through the development, manufacture, and sales of photovoltaic modules for residential, public and industrial use.
Panasonic’s solar cells have a unique structure that combines a crystalline silicon substrate and an amorphous silicon film, and feature high conversion efficiency and excellent temperature characteristics. Conventional automotive solar cells can output up to several tens of watts and have been used only for the auxiliary charging of 12 V batteries and ventilation power sources for parked cars; however, the use of the features of Panasonic’s solar cells allow a high output (approx.180 W) in a limited area on a car’s roof, enabling the charging of the drive lithium-ion batteries as well as 12 V batteries, resulting in a possible extension of an EV’s travel distance and increased in fuel economy.

Furthermore, Panasonic has developed technologies to laminate three-dimensional curved glass to match the new Prius PHV’s elegant body design, achieving the installation of modules on the roof without impairing the advanced design. This will eventually contribute to the improvement of the vehicle’s environmental performance.

Panasonic will make efforts to expand the use of the “HIT™ Photovoltaic Module for Automobile” and contribute to the achievement of an environmentally friendly society in the automotive as well as the housing and industrial fields.

1. A high output allows the charging of the drive and 12 V batteries

Although photovoltaic modules were installed as an option in the previous Prius HV, their applications were limited to areas such as ventilation for in-vehicle air-conditioning. The currently developed dedicated automotive modules have achieved a high output of approx. 180 W, three times or more the conventional output, which not only easily turns them into a power source for in-vehicle accessories but also allows the drive battery charging. Electrical energy generated from solar cells can be applied to the charging of driving power sources, thereby extending travel distance per charge.

The new Prius PHV has an extremely novel and complex body design that enables it to achieve a graceful style, sense of quietness based on aerodynamic control, and low fuel consumption. In particular, the gradual curve design is applied to the overall roof, creating a complex structure made of three-dimensional curves from the windshield and pillars to around the hood. Panasonic developed a unique lamination technology that conforms to this complex three-dimensional curved roof. This technology features the thermal compression bonding of the upper and lower module surfaces with flexible material and is groundbreaking in that it allows the manufacturing process to address three-dimensional curves in addition to conventional flat surfaces. The development of this technology enabled the practical use of automotive modules.

3. As with the 2012 model, Panasonic’s automotive prismatic lithium-ion batteries are mounted

As with the Prius PHV that was released in 2012, Panasonic’s automotive prismatic lithium-ion batteries have been adopted for the drive batteries of the new Prius PHV. These batteries achieve a good balance of elements required for automotive batteries, including high capacity, high output, and high safety levels, and charge regenerated energy and electrical energy that has been generated by solar cells to contribute to the extension of an EV’s travel distance and increased fuel economy.

• High-efficiency power generation made possible even under high temperatures due to excellent temperature characteristics
Photovoltaic modules mounted on the roof of the new Prius PHV are HIT™,which are particularly well received in the residential solar power generation system market. Their biggest features include the ability to generate ample power effectively even if the temperature is high in an installation environment or when the installation area is limited. These features are optimal for automotive photovoltaic modules, and were created by heterojunction solar cells, which Panasonic developed independently.The surface of a silicon substrate is covered by an amorphous silicon film, which allows the retrieval of electrically charged particles that are generated within solar cells without omission and eventually achieves high output.
The rated output is the value of the power output when the module temperature is 25°C. In principle, the output of solar cells decreases when the temperature rises. On a sunny summer day, the exterior temperature including the vehicle’s roof can reach 80°C or higher. When photovoltaic modules are mounted on a vehicle, output decreases as much or more than it does when they are mounted on residential roofs. However, any output decline is minimized because the temperature coefficient of output of Panasonic’s heterojunction solar cells is smaller compared to general solar cells.
These solar cells are equipped with two optimal features as automotive solar cells, namely high output and resistance to a hot environment (less output decline).

Panasonic Corporation is a worldwide leader in the development of diverse electronics technologies and solutions for customers in the consumer electronics, housing, automotive, enterprise solutions and device industries. Since its founding in 1918, the company has expanded globally and now operates 474 subsidiaries and 94 associated companies worldwide, recording consolidated net sales of 7.553 trillion yen for the year ended March 31, 2016. Committed to pursuing new value through innovation across divisional lines, the company uses its technologies to create a better life and a better world for its customers. To learn more about Panasonic:
http://www.panasonic.com/global