Researcher Steffen Malkowsky, together with research colleagues from Lund University, Sweden, and the University of Bristol, UK, has achieved a new world record in 5G technology, thereby surpassing the previous record that he himself contributed to last spring. The successful experiment is an important step towards a new type of wireless communication – a system where extremely weak radio signals manage to provide radically improved connectivity. 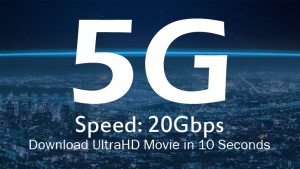 Researchers at the universities of Lund and Bristol have conducted a number of experiments using a form of 5G technology called Massive MIMO (multiple input, multiple output), and set not one but two world records in so-called spectrum efficiency for wireless communication. Spectrum efficiency measures how much data can successfully be packed into a radio signal transmitted from an antenna.

This 5G technology developed by the researchers is extremely efficient – in fact, the most efficient technology ever when it comes to managing many simultaneous users. The latest world record was set when researchers from Lund and Bristol attained more than 20 times the total data speed of today’s 4G technology, thereby almost doubling the previous record where they, using the same technology, achieved a twelve-fold improvement.

“Setting a new world record was a significant event as it demonstrated that it is possible to transmit 22 times more data compared to current wireless systems. Although the goal is for 5G to increase the total transmission capacity by a factor 1 000, this is still a big step”, says Steffen Malkowsky, researcher in Electrical and Information Technology at the Lund University Faculty of Engineering.

An award ceremony was held the other day in Austin, Texas, organised by the company National Instruments (NI). There Steffen Malkowsky together with research colleague Paul Harris from the University of Bristol received five separate awards for their research concerning Massive Mimo. They won NI’s Wireless and Mobile Communications category together with NI’s Engineering Grand Challenges Award, Hewlett Packard Enterprise (HPE) Edgeline Big Analog Data Award, Powered by Xilinx Award, and the 2016 Customer Application of the Year Award.

At the end of August the researchers from Bristol will visit Lund to test how well the technology works when the connected units are mobile.

Steffen Malkowsky finishes by pointing out that both the 5G records and the five awards are the result of a large and very successful team-work both within and between Lund University, University of Bristol, and National Instruments.