Rice University’s latest nanophotonics research could expand the color palette for companies in the fast-growing market for glass windows that change color at the flick of an electric switch.

“When we put charges on the molecules or remove charges from them, they go from clear to a vivid color,” said Halas, director of the Laboratory for Nanophotonics (LANP), lead scientist on the new study and the director of Rice’s Smalley-Curl Institute. “We sandwiched these molecules between glass, and we’re able to make something that looks like a window, but the window changes to different types of color depending on how we apply a very low voltage.” 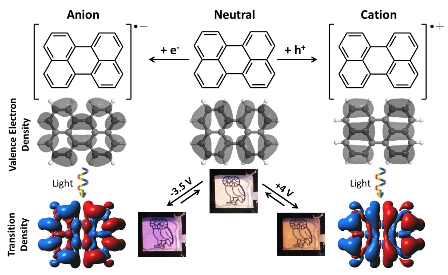 Adding and removing an electron from neutral perylene (center column) produces an anion (left) and cation (right), respectively, with different electronic structures (middle row). Upon excitation with visible light, the anion and cation give rise to two unique molecular plasmon resonances, each with their own distinct color (bottom row). (Image courtesy of Grant Stec/Rice University)

Glass that changes color with an applied voltage is known as “electrochromic,” and there’s a growing demand for the light- and heat-blocking properties of such glass. The projected annual market for electrochromic glass in 2020 has been estimated at more $2.5 billion.

“Perylene is part of a family of molecules known as polycyclic aromatic hydrocarbons,” Stec said. “They’re a fairly common byproduct of the petrochemical industry, and for the most part they are low-value byproducts, which means they’re inexpensive.”

There are dozens of polycyclic aromatic hydrocarbons (PAHs), but each contains rings of carbon atoms that are decorated with hydrogen atoms. In many PAHs, carbon rings have six sides, just like the rings in graphene, the much-celebrated subject of the 2010 Nobel Prize in physics.

“This is a really cool application of what started as fundamental science in plasmonics,” Lauchner said.

A plasmon is wave of energy, a rhythmic sloshing in the sea of electrons that constantly flow across the surface of conductive nanoparticles. Depending upon the frequency of a plasmon’s sloshing, it can interact with and harvest the energy from passing light. In dozens of studies over the past two decades, Halas, Rice physicist Peter Nordlander and colleagues have explored both the basic physics of plasmons and potential applications as diverse as cancer treatment, solar-energy collection, electronic displays and optical computing.

The quintessential plasmonic nanoparticle is metallic, often made of gold or silver, and precisely shaped. For example, gold nanoshells, which Halas invented at Rice in the 1990s, consist of a nonconducting core that’s covered by a thin shell of gold.

“Our group studies many kinds of metallic nanoparticles, but graphene is also conductive, and we’ve explored its plasmonic properties for several years,” Halas said.

She noted that large sheets of atomically thin graphene have been found to support plasmons, but they emit infrared light that’s invisible to the human eye.

“Studies have shown that if you make graphene smaller and smaller, as you go down to nanoribbons, nanodots and these little things called nanoislands, you can actually get graphene’s plasmon closer and closer to the edge of the visible regime,” Lauchner said.

In 2013, then-Rice physicist Alejandro Manjavacas, a postdoctoral researcher in Nordlander’s lab, showed that the smallest versions of graphene — PAHs with just a few carbon rings — should produce visible plasmons. Moreover, Manjavacas calculated the exact colors that would be emitted by different types of PAHs.

“One of the most interesting things was that unlike plasmons in metals, the plasmons in these PAH molecules were very sensitive to charge, which suggested that a very small electrical charge would produce dramatic colors,” Halas said.

Lauchner said the project really took off after Stec joined the research team in 2015 and created a perylene formulation that could be sandwiched between sheets of conductive glass.

In their experiments, the researchers found that applying just 4 volts was enough to turn the clear window greenish-yellow and applying negative 3.5 volts turned it blue. It took several minutes for the windows to fully change color, but Halas said the transition time could easily be improved with additional engineering.

Stec said the team’s other window, which turns from clear to black, was produced later in the project.

“Dr. Halas learned that one of the major hurdles in the electrochromic device industry was making a window that could be clear in one state and completely black in another,” Stec said. “We set out to do that and found a combination of PAHs that captured no visible light at zero volts and almost all visible light at low voltage.”

The research was supported by the Robert A. Welch Foundation. The ACS Nano paper was co-authored by former Rice graduate student Yao Cui, a data scientist at KUKA North America in Austin who earned her doctorate in computational chemistry from Rice in 2016.

About Rice University
Located on a 300-acre forested campus in Houston, Rice University is consistently ranked among the nation’s top 20 universities by U.S. News & World Report. Rice has highly respected schools of Architecture, Business, Continuing Studies, Engineering, Humanities, Music, Natural Sciences and Social Sciences and is home to the Baker Institute for Public Policy. With 3,879 undergraduates and 2,861 graduate students, Rice’s undergraduate student-to-faculty ratio is 6-to-1. Its residential college system builds close-knit communities and lifelong friendships, just one reason why Rice is ranked No. 1 for happiest students and for lots of race/class interaction by the Princeton Review. Rice is also rated as a best value among private universities by Kiplinger’s Personal Finance.