IKONICS Corporation, a Duluth based imaging technology company, announced today the launch of New IKONMetal, a metal-matrix composite engineered to accommodate engraving, routing and sandblasting—all of which are technologies commonly used in the signage and awards & recognition industries for the creation and decoration of custom signage, trophies, awards, plaques, etc. 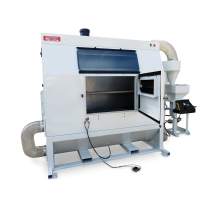 While patent-applied-for IKONMetal was originally designed specifically to accommodate sandblasting, New IKONMetal has been improved and can be shaped, carved, etched and sculpted using common rotary engravers. This versatility is crucial in the signage and awards & recognition industries where artisans rely on a multitude of methods to create their products.

The launch of New IKONMetal immediately gives signage and awards & recognition professionals access to lowcost, quick turnaround, easy-to-use metallic material—an increasingly popular medium in those markets. Prior to IKONMetal, the primary options for metal signage and awards were cast, chemically etched, or machined products which are inherently more costly and imply considerable lead times—10 working days is an industry standard.

With New IKONMetal, an adequately equipped user can produce similar signage in less than one hour.