Most robots achieve grasping and tactile sensing through motorized means, which can be excessively bulky and rigid. A Cornell University group has devised a way for a soft robot to feel its surroundings internally, in much the same way humans do.

A group led by Robert Shepherd, assistant professor of mechanical and aerospace engineering and principal investigator of Organic Robotics Lab, has published a paper describing how stretchable optical waveguides act as curvature, elongation and force sensors in a soft robotic hand. 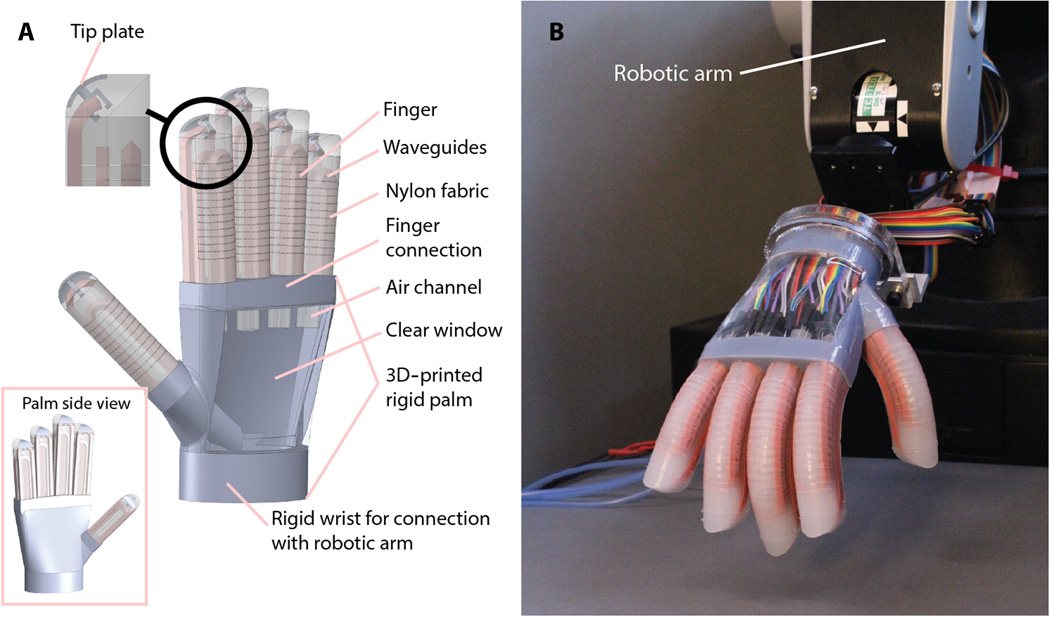 “Most robots today have sensors on the outside of the body that detect things from the surface,” Zhao said. “Our sensors are integrated within the body, so they can actually detect forces being transmitted through the thickness of the robot, a lot like we and all organisms do when we feel pain, for example.”

Optical waveguides have been in use since the early 1970s for numerous sensing functions, including tactile, position and acoustic. Fabrication was originally a complicated process, but the advent over the last 20 years of soft lithography and 3-D printing has led to development of elastomeric sensors that are easily produced and incorporated into a soft robotic application.

Shepherd’s group employed a four-step soft lithography process to produce the core (through which light propagates), and the cladding (outer surface of the waveguide), which also houses the LED (light-emitting diode) and the photodiode.

The more the prosthetic hand deforms, the more light is lost through the core. That variable loss of light, as detected by the photodiode, is what allows the prosthesis to “sense” its surroundings.

“If no light was lost when we bend the prosthesis, we wouldn’t get any information about the state of the sensor,” Shepherd said. “The amount of loss is dependent on how it’s bent.”

The group used its optoelectronic prosthesis to perform a variety of tasks, including grasping and probing for both shape and texture. Most notably, the hand was able to scan three tomatoes and determine, by softness, which was the ripest.

This work was supported by a grant from Air Force Office of Scientific Research, and made use of the Cornell NanoScale Science and Technology Facility and the Cornell Center for Materials Research, both of which are supported by the National Science Foundation.