A team of researchers has found a way to detect trace gases down to concentrations at the parts-per-quadrillion level using a new variation on the photoacoustic effect, a technique that measures the sound generated when light interacts with molecules.

“In many ways, the photoacoustic effect is already the most practical method available for detecting pollutants in the atmosphere,” said Gerald Diebold, a professor of chemistry at Brown University and coauthor of a new paper describing his lab’s research. “But when the concentration of the molecules you’re trying to detect gets down to the parts-per-trillion level, the signal become too weak to detect. We’ve developed a new photoacoustic technique that boosts the signal and enables us to get down to the parts-per-quadrillion level, which to our knowledge is a record.” 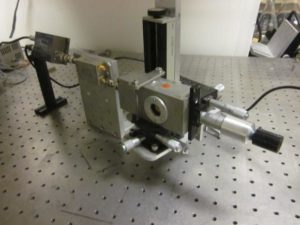 The study, which was a collaboration between Diebold’s lab at Brown and the lab of Fapeng Yu at Shandong University in China, is published in the Proceedings of the National Academy of Sciences.

The photoacoustic effect takes place when a beam of light is absorbed by a gas, liquid or solid causing it to expand. The expansion is a mechanical motion that results in the launching of a sound wave. The effect was first discovered by Alexander Graham Bell in the 1880s but was of little practical value until the invention of the laser, which — as a result of its typically narrow linewidth and high power — made photoacoustic signals large enough to be easily detectable.

Photoacoustic detectors work by zapping a material with a laser tuned to a wavelength that is absorbed by the molecule of interest. In a typical photoacoustic experiment, the laser beam is switched on and off at a frequency that can be detected by a sensitive microphone to listen for any sound waves produced. Different molecules absorb light at different frequencies, so by adjusting the frequency of the laser, it’s possible to fine-tune a detector for specific substances. So to look for ammonia in air, for example, the laser would be tuned to the specific absorption frequency of ammonia molecules. One would then zap an air sample, and if the microphone picks up sound waves, that means the sample contains ammonia.

But the smaller the concentration of the target substance, the quieter the signal. So Diebold and his colleagues used an unconventional technique to boost the signal amplitude.

“What we’ve done is devise a method that relies on three different resonances,” Diebold said. “The signal gets bigger with each resonance.”

Instead of a single laser beam, Diebold and his colleagues combine two beams at a specific frequency and angle. The joining of the beams creates a grating — a pattern of interference between the two beams. When the laser frequencies are tuned just right, the grating travels in a detection cell at the speed of sound, creating an amplification effect at each of the peaks in the grating.

The second resonance is created by a piezoelectric crystal used in the experiment, which vibrates precisely at the frequency of the combined laser beams. The small compressive forces in the pressure waves gradually induce motion in a crystal much in the same way that small, repeated pushes of a playground swing eventually lead to a large amplitude motion of the swing.

The third resonance is generated by adjusting the length of the cavity in which the crystal is mounted so that it resonates when an integral number of half wavelengths of the sound exactly matches the cavity length. The output of the crystal, which is piezoelectric so that it generates a voltage proportional to its oscillatory motion, is sent to amplifiers and sensitive electronic devices to record the acoustic signal.

“One of the reasons that the moving grating method worked so well is that Professor Yu’s group at Shandong University grew a special crystal that gives very large signals in response to the pressure waves,” Diebold said. “We were told that it took them three months to synthesize the crystal.”

In their experiments, the researchers showed that by using those three resonances, they were able to detect the gas sulfur hexafluoride in amounts down to the parts per quadrillion.

Diebold thinks the technique will be useful in developing detectors that are sensitive to very low pollutant gas concentrations, or for detecting molecules that have weak absorptions that make them inherently difficult to detect.

Diebold noted that in carrying out the experiments, he and his colleagues were “amazed to find that because the frequencies are so high — in the hundreds of kilohertz range — that there is virtually no background interference, either from electrical pickup or from acoustic sources such as room noise, wind or vibrations of a building. That means we can do experiments in an open cavity without having to block outside noise. So if you have a landfill and you’re trying to detect methane, for example, you just take this detector, sit it there in the open air and continuously monitor the output.”

There remains some work on engineering a compact instrument before this technique can be used outdoors, but this study offers a convincing proof of concept, the researchers say.

Diebold’s coauthors on the paper were Brown graduate students Lian Xiong and Wenyu Bai, along with Feifei Chen, Xian Zhao and Fapeng Yu from Shandong University in China. The research was funded in part by the U.S. Department of Energy (DE-SC0001082).