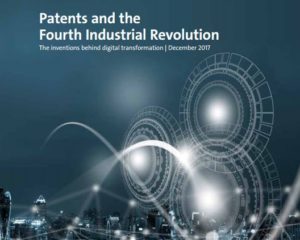 European patent applications related to smart connected objects are rising rapidly, achieving a growth rate of 54% in the last three years, the first European Patent Office (EPO) landscaping study on “Patents and the Fourth Industrial Revolution (4IR)” reveals. Conducted by the EPO in co-operation with Handelsblatt Research Institute, the study examines this profound technology trend that is now being observed across a whole range of technical fields.

Using state-of-the-art patent information tools and drawing on the expertise of its patent examiners, the EPO identified over 48 000 patent applications filed until the end of 2016 and relating to three relevant technology sectors of 4IR: Firstly the core technologies in the ICT field that make it possible to create connected objects; secondly, the enabling technologies that complement core technologies, such as Artificial intelligence (AI) and User interfaces; and thirdly, application domains of these technologies, such as Vehicles, Enterprise and Home.

“During the last World Economic Forum in Davos, a particular focus was put on mapping trends in artificial intelligence technologies. In this regard, patent information is helping us obtain a better understanding of a subject that is currently capturing the imagination of business leaders, industry and the wider public,” said EPO President Benoît Battistelli.

Presenting the main trends, the study discusses the continued integration of the different technologies into a variety of new market applications. The majority of the inventions filed concern new applications domains (e.g. Personal, Enterprise, Vehicles) and inventions related to core technologies (Connectivity, Hardware and Software). However, the fastest growth rates are observed in enabling technologies such as 3D systems, Artificial intelligence or Power supply. 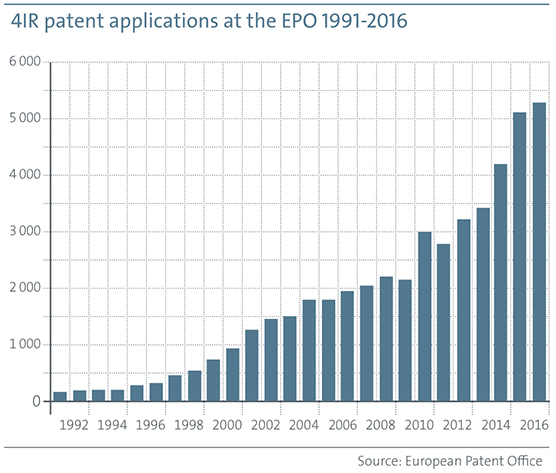 Europe, the USA and Japan are the established leaders

The study sets out both the leading patent applicants involved in 4IR and the regions of origin of the patent applications for 4IR inventions filed with the EPO. It highlights that in 2016, Europe, the USA and Japan were the main innovation centres. However, the findings also demonstrate that inventions coming from the Republic of Korea and the People’s Republic of China have been increasing at a faster rate in recent years. 4IR patent applications from these two countries are highly concentrated among a few large ICT companies. 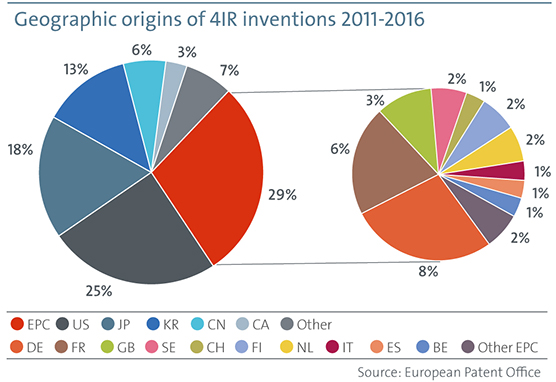 In Europe, Germany and France are foremost in 4IR innovation. Germany stands out in the application domains of Vehicles, Infrastructure and Manufacturing, while France leads in enabling technologies such as Artificial intelligence, Security, User interfaces and 3D systems. In terms of regions, the greater Paris area (Île de France) and the greater Munich area (Oberbayern) are the leading European locations in 4IR technologies.

A further finding is that 25 companies, most of them located in Asia, accounted for about half of all 4IR patent applications filed with the EPO between 2011 and 2016. The study shows that innovation in core technologies is mainly led by a limited number of large companies focused on information and communication technology (ICT), while inventions in enabling technologies and application domains are less concentrated, and the top applicants in these sectors originate from a larger variety of industries.

About the European Patent Office

With nearly 7 000 staff, the European Patent Office (EPO) is one of the largest public service institutions in Europe. Headquartered in Munich with offices in Berlin, Brussels, The Hague and Vienna, the EPO was founded with the aim of strengthening co-operation on patents in Europe. Through the EPO’s centralised patent granting procedure, inventors are able to obtain high-quality patent protection in up to 43 countries, covering a market of some 700 million people. The EPO is also the world’s leading authority in patent information and patent searching.