Researchers have engineered a material that could lead to a new generation of computing devices, packing in more computing power while consuming a fraction of the energy that today’s electronics require.

Known as a magnetoelectric multiferroic material, it combines electrical and magnetic properties at room temperature and relies on a phenomenon called “planar rumpling.” 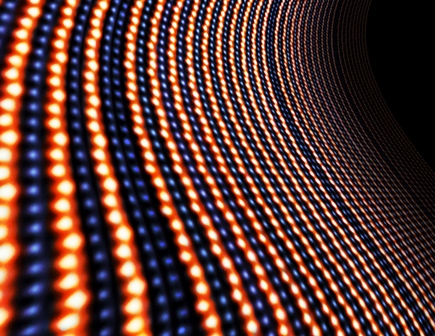 An extra plane of iron atoms was inserted every ten repeats, substantially changing the magnetic properties. The jagged appearance of the lutetium atoms is due to atomic rumpling.

The new material sandwiches together individual layers of atoms, producing a thin film with magnetic polarity that can be flipped from positive to negative or vice versa with small pulses of electricity. In the future, device-makers could use this property to store digital 0’s and 1’s, the binary backbone that underpins computing devices.

“Before this work, there was only one other room-temperature multiferroic whose magnetic properties could be controlled by electricity,” said John Heron, assistant professor in the Department of Materials Science and Engineering at the University of Michigan, who worked on the material with researchers at Cornell University. “That electrical control is what excites electronics makers, so this is a huge step forward.”

Room-temperature multiferroics are a hotly pursued goal in the electronics field because they require much less power to read and write data than today’s semiconductor-based devices. In addition, their data doesn’t vanish when the power is shut off. Those properties could enable devices that require only brief pulses of electricity instead of the constant stream that’s needed for current electronics, using an estimated 100 times less energy.

“Electronics are the fastest-growing consumer of energy worldwide,” said Ramamoorthy Ramesh, associate laboratory director for energy technologies at Lawrence Berkeley National Laboratory. “Today, about 5 percent of our total global energy consumption is spent on electronics, and that’s projected to grow to 40-50 percent by 2030 if we continue at the current pace and if there are no major advances in the field that lead to lower energy consumption.”

To create the new material, the researchers started with thin, atomically precise films of hexagonal lutetium iron oxide (LuFeO3), a material known to be a robust ferroelectric, but not strongly magnetic. Lutetium iron oxide consists of alternating monolayers of lutetium oxide and iron oxide. They then used a technique called molecular-beam epitaxy to add one extra monolayer of iron oxide to every 10 atomic repeats of the single-single monolayer pattern.

“We were essentially spray painting individual atoms of iron, lutetium and oxygen to achieve a new atomic structure that exhibits stronger magnetic properties,” said Darrell Schlom, a materials science and engineering professor at Cornell and senior author of a study on the work.

The result was a new material that combines a phenomenon in lutetium oxide called “planar rumpling” with the magnetic properties of iron oxide to achieve multiferroic properties at room temperature.

Heron explains that the lutetium exhibits atomic-level displacements called rumples. Visible under an electron microscope, the rumples enhance the magnetism in the material, allowing it to persist at room temperature. The rumples can be moved by applying an electric field, and are enough to nudge the magnetic field in the neighboring layer of iron oxide from positive to negative or vice versa, creating a material whose magnetic properties can be controlled with electricity—a “magnetoelectric multiferroic.”

While Heron believes a viable multiferroic device is likely several years off, the work puts the field closer to its goal of devices that continue the computing industry’s speed improvements while consuming less power. This is essential if the electronics industry is to continue to advance according to Moore’s law, which predicts that the power of integrated circuits will double every year. This has proven true since the 1960s, but experts predict that current silicon-based technology may be approaching its limits.

A study on the work, titled “Atomically engineered ferroic layers yield a room-temperature magnetoelectric multiferroic,” was published in the Sept. 22 issue of Nature. It was supported by the Department of Energy’s Office of Science. Robert Hovden, U-M assistant professor of materials science engineering, is also a co-author on the study.