An international team of researchers led by the Centre de Recherche Paul Pascal (UMR 5031, CNRS -University of Bordeaux) has discovered a novel way to design magnets with outstanding physical properties, which could make them complementary to, or even competitive with traditional inorganic magnets, which are widely used in everyday appliances.

Magnets are an integral part of our everyday lives and are found in many medical and electronic devices, including household appliances, electric motors, and computers. The demand for new magnetic materials has significantly increased in recent years. Many of such materials are composed of metallic elements or rare earth metals that can be used at room temperature. In 2019, the global market for these inorganic magnets was worth US$ 19.5 billion, and is expected to reach US$ 27.5 billion by 2025. 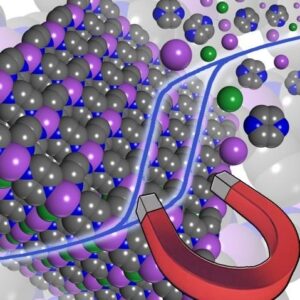 Pictural representation of the molecule-based magnet and its magnetic properties.
CREDIT
Rodolphe Clérac

However, inorganic magnets can be expensive to fabricate and access to their constituent elements is often limited.

An international team of researchers led by CNRS researcher Rodolphe Clérac at the University of Bordeaux, has found a new chemical strategy to design magnets based coordination networks composed of an organic radical (a molecule with an unpaired electron, thus carries spin) and a paramagnetic (spin-carrying) metal ion to generate a very strong magnetic interaction.

These new magnets have many desirable physical properties, including high operating temperature (up to 242 °C), large coercivity (i.e. the ability to store information) and low density.

The new lightweight magnets with densities around 1.2 g cm-3 vs. more than 5 g cm-3 for traditional inorganic magnets exhibit large room temperature coercivity up to 7500 Oe (2 orders of magnitude higher than previously reported for molecule-based systems) and high operating temperatures that exceed the current record for coordination networks by more than 100 °C.

In addition to the outstanding physical properties, the process of synthesizing these magnets is relatively straightforward, and may be easily applied to many metal-organic materials for conversion to metal-organic magnets.

Despite the relative ease of preparing the new magnets, they are very air-sensitive and poorly crystalline, yet the researchers were able to overcome these obstacles to fully characterize these magnets. The electronic and magnetic properties of these magnets were characterized in an element-selective manner through several international collaboration. While the BM01 and ID12 beamlines at the European Synchrotron Research Facility (ESRF) were key to understanding these materials with regards to their structure and magnetic properties, however, recent Academy of Finland research fellow Aaron Mailman contributed to the analytical and spectroscopic characterization of these magnets.

”The synthetic strategy used in this work should be widely applicable to related systems and while these results represent new benchmarks for coercivity and critical temperature, in low density, lightweight metal-organic magnets, I expect future results will lead to further improvements and real-world technology applications” says Aaron Mailman.

Rodolphe Clérac says ”To be honest, I hadn’t considered applications of my research before this work, as my team and I do fundamental science, but it is now clear to me that we can potentially use these materials in magnetoelectronic, magnetic sensors and recording technologies, especially when the weight is an issue, for example, in smartphones or satellites”, he concludes.