PTC (NASDAQ: PTC) announced from Vision Summit that the Vuforia® platform, the most widely used software for augmented reality (AR) development, will support devices based on Tango, a set of sensors from Google, for development of a new generation of interactive AR experiences.

The Vuforia AR platform uses advanced computer vision technology to enable digital content to be placed in real-world environments. Today, most AR content is associated with a specific object such as a toy, catalog or piece of machinery. Content is typically triggered by the object, and does not have the ability to interact with surfaces in the surrounding environment such as the floor, walls, furniture, fixtures, etc. This lack of interaction remains a barrier to a wide range of room-scale AR experiences. 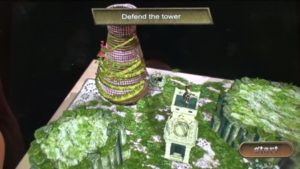 The Vuforia Smart Terrain® feature addresses this challenge by providing developers with an easy-to-use representation of the physical environment. Vuforia Smart Terrain delivers a hierarchy of objects and surfaces similar to a scene graph, but designed for AR development. This environmental scene graph is created dynamically and can include objects defined by a developer, as well as objects and surfaces reconstructed from the environment. For example, toys can now come alive and roam a child’s playroom; furniture can pop out of a catalog to redecorate any room in the house.

Originally announced in 2014, Smart Terrain was designed to make use of a new generation of depth-aware camera technologies, such as those in Tango. The Lenovo Phab 2 Pro and ASUS ZenFone AR are the first commercial smartphones with this capability and signal a new generation of devices that are expected to deliver a dramatically improved AR experience, and lead to further AR innovation and adoption.

“Vuforia Smart Terrain will help realize the potential for devices with 3D camera technologies by making them easy to use for AR developers,” said Jay Wright, president, Vuforia. “We’re providing developers a huge leap in creative freedom, and we can’t wait to see what they do with it.”

Vuforia Smart Terrain for Tango is expected to be available for Unity later this year. Developers interested in getting started with Vuforia today can visit developer.vuforia.com.

The Vuforia® augmented reality software platform enables digital content to be placed in real world environments. Vuforia includes easy-to-use workflows, SDKs, and cloud services for use with leading development tools including Unity, Xcode, Android Studio and Microsoft Visual Studio. With support for leading phones, tablets, and digital eyewear including ODG R7 and Microsoft HoloLens, Vuforia has been adopted by more than 350,000 developers globally who have published more than 40,000 AR apps. Vuforia enables a wide range of applications for consumer and enterprise use, and powers the majority of AR apps in the App Store and Google Play.

Tango is a set of sensors that enables augmented reality (AR) experiences on your smartphone, including navigation, utilities and gaming. All you have to do is look through your phone, and you’ll see objects and information overlaid on the real world—from directional arrows inside a store or museum, to real-time measurements of physical objects, to hordes of attacking zombies.

PTC has the most robust Internet of Things technology in the world. In 1986 we revolutionized digital 3D design, and in 1998 were first to market with Internet-based PLM. Now our leading IoT and AR platform and field-proven solutions bring together the physical and digital worlds to reinvent the way you create, operate, and service products. With PTC, global manufacturers and an ecosystem of partners and developers can capitalize on the promise of the IoT today and drive the future of innovation.

The timing of any product or integration release, including any features or functionality, is subject to change at PTC’s discretion.

Vuforia, Smart Terrain, PTC, and the PTC logo are trademarks or registered trademarks of PTC Inc. or its subsidiaries in the United States and other countries.