Today, there is great interest in using distributed sensors to continually monitor the structural health of large structures such as dams or bridges. With 1 million sensing points, a newly developed fiber optic distributed sensor could offer significantly faster detection of structural problems than is currently available.

“With fiber-based sensors, it is possible to precisely detect erosion or cracking before a dam fails, for example,” said Alejandro Dominguez-Lopez from the University of Alcala (UAH) in Spain, from the research team that developed the new sensor. “Earlier detection of a problem means it might be possible to prevent it from getting worse or could provide more time for evacuation.” 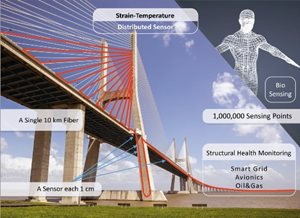 Fiber optic distributed sensors are ideal for monitoring infrastructure because they can be used in harsh environments and in areas that lack a nearby power supply. If a single fiber is placed along the length of a bridge, for example, changes in the structure at any of the sensing points along the optical fiber will cause detectable changes in the light traveling down the fiber. Although the popularity of fiber optic distributed sensors is growing, they are currently used primarily to detect leaks in oil pipes and to monitor for landslides along railroads.

In The Optical Society (OSA) journal Optics Letters, Dominguez-Lopez and his colleagues from UAH and the Swiss Federal Institute of Technology (EPFL) report the first fiber optic distributed sensor that can sense strain and temperature changes from 1 million sensing points over a 10-kilometer optical fiber in less than 20 minutes. Strain, which is a measure of deformation, indicates how much mechanical stress is on an object or structure.

The new sensor is about 4.5 times faster than previously reported sensors with 1 million sensing points. Although there isn’t a magic number, more sensing points means fewer fiber-optic units are needed to monitor an entire structure. This simplifies the overall sensing scheme and could potentially reduce costs.

“Because we have such a large density of sensing points — one per centimeter — our optimized sensor could also be used for monitoring in applications such as avionics and aerospace, where it’s important to know what is happening in every inch of a plane wing, for example,” said Dominguez-Lopez.

Improving sensor performance
The new sensor uses an approach known as Brillouin optical time domain analysis, which requires pulsed and continuous wave laser signals to interact. The researchers discovered that the traditional method of generating the continuous signal caused distortions in the system at higher laser powers. These problems could be avoided by changing the way that laser signal was generated, allowing them to increase the laser power and hence improve the sensing performance.

“The detrimental effects that we studied and corrected have been affecting the performance of commercially-available Brillouin optical time domain sensors for some time,” said Dominguez-Lopez. “If manufacturers incorporate our optimization into their sensors, it could improve performance, particularly in terms of acquisition speed.”

Using the new approach, the researchers demonstrated that they could measure the temperature of a hot spot to within 3 degrees Celsius from the end of a 10-kilometer long fiber.

New applications ahead
The researchers are now working to make the sensor even faster by looking for ways to further reduce the acquisition time. They also want to increase the density of sensing points to more than one per centimeter, which could allow the technology to expand into completely new areas such as biomedical applications.

The optical fibers could also potentially be adapted for use in textiles, where the sensors could help to monitor a person’s health or screen for disease. For example, the researchers think it might possible to use the fiber optic sensors to detect temperature deviations that are present in breast cancer. For this type of application, more sensing points in a smaller area would be more important than using a particularly long fiber.

“In our paper, we not only identified a major limitation of this sensing technique but also demonstrated a way to overcome that constraint,” said Dominguez-Lopez. “The new sensor could enable improved structural monitoring and help move this sensing technology into exciting new research areas and applications.”

About The Optical Society
Founded in 1916, The Optical Society (OSA) is the leading professional organization for scientists, engineers, students and entrepreneurs who fuel discoveries, shape real-life applications and accelerate achievements in the science of light. Through world-renowned publications, meetings and membership initiatives, OSA provides quality research, inspired interactions and dedicated resources for its extensive global network of optics and photonics experts. For more information, visit: osa.org.