The alloy is made from the same type of material used in flexible spectacles and allows the suspension to ‘bounce back’ into shape after impact, so that the vehicle can continue its mission. Initial tests of a prototype have proved successful and engineers at BAE Systems in Telford, Shropshire believe that the new suspension system could be made available in the next decade.

Currently, the hulls of combat vehicles and their passengers are protected from blasts such as mines or IEDs, but key operational parts such as the vehicle’s suspension can still be damaged – meaning they must be rescued by other military units. The memory metal alloy was first developed by the United States Naval Ordnance Laboratory in the 1960s, but engineers at BAE Systems believe this is the first time it has been used to build an entire suspension system. Using memory metal also means the spring can be removed entirely from the suspension – strengthening and simplifying the system further.

A prototype of the suspension system has already been constructed and tested by a team of experts and apprentices at BAE Systems as part of their response to a competition placed by the Government’s Defence, Science and Technology Laboratory for an unmanned Highly Robust Ground Platform. The small-scale prototype underwent five increasingly powerful explosive tests, showing significant resilience against the blasts as a result of its highly robust construction.

Now, the Company’s engineers are investigating adapting memory metal suspension for full-size combat vehicles, meaning that bendable titanium alloys could form a part of military operations within the next 10 years.
Marcus Potter, Head of Mobility at BAE Systems Land (UK), said: “This unique use of memory metals could prove a real game-changer for combat vehicles taking part in operations. Being able to adapt to changing situations is hugely important to maintaining effectiveness, and this application of bendable titanium could give armed forces the required flexibility – and survivability – to complete tasks in challenging areas.” 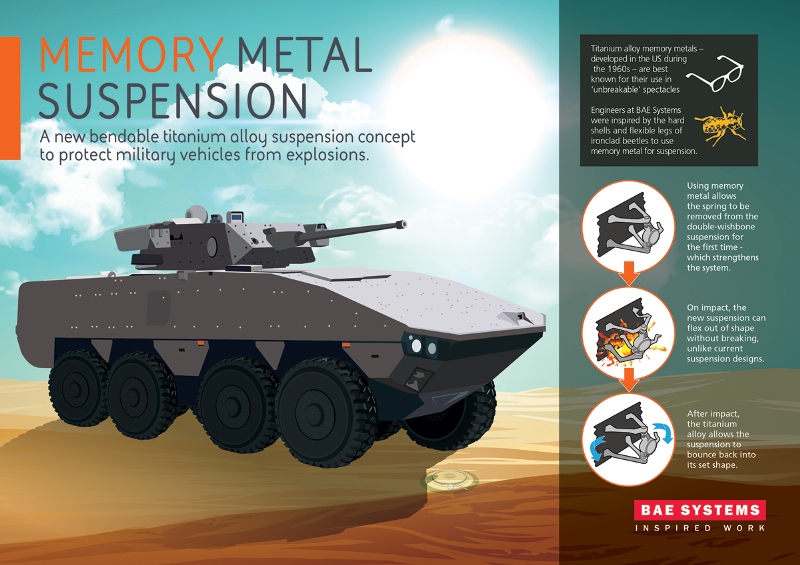 The concept of using memory metals for suspension was developed after BAE Systems engineers reviewed a range of innovations in other high technology sectors and considered how they could be applied to combat vehicles.

BAE Systems businesses have a portfolio of patents and patent applications covering approximately 2000 inventions internationally. The Company has developed some of the world’s most innovative technologies and invests in research and development to generate future products and capabilities.