“Netflix must be examined as a zebra among horses,” said Professor Lotz who is in the middle of a three-year Australian Research Council Discovery Project – Internet-distributed television: Cultural, industrial and policy dynamics. She recently published an article in the International Journal of Cultural Studies – ‘In Between the Global and the Local: Mapping the Geographies of Netflix as a Multinational Service.’ 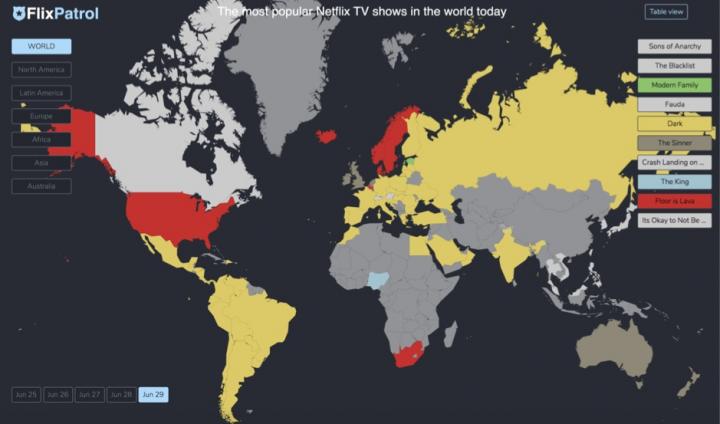 FlixPatrol graphic of the most popular Netflix shows in the world as of June 2020.
CREDIT
FlixPatrol

“Few recognize the extent to which Netflix has metamorphosed into a global television service. Unlike services that distribute only US-produced content, Netflix has funded the development of a growing library of series produced in more than 27 countries, across six continents, including Australia.

“Netflix has regional offices now in Singapore, Amsterdam, and São Paulo. Last year it opened its Australian headquarters in Sydney.”

“Internet-distributed video services such as Netflix, have completely transformed the entertainment landscape and the competitive field in which free-to-air television operates, as well as turned the definition of ‘pay TV’ on its head,” Professor Lotz said.

“But the Netflix model has been the real gamechanger. Previously, the core business of channels like the BBC, ABC or NBC that commission and pay the lion’s share of production fees for series has been nation bound, even if those shows would someday be available to audiences in many countries.

“Netflix’s propensity to commission series in multiple countries, and then make them available to the full 150-some million subscribers simultaneously, is unprecedented and something no television channel could do.

“A local example of this is Hannah Gadsby: Nanette which has given the Australian comedian a new global profile. She now has a second Netflix show – Hannah Gadsby: Douglas.

“And although many believe Netflix competes with the likes of Amazon Prime Video, Apple TV+, Stan and Disney+, none of these services show evidence of supporting multinational production at a scale comparable to Netflix.

“Our research project has compiled a database of series commissioned by Netflix (in whole or part) and their country of origin. We have found more than half of the titles are produced outside the US and initial analysis of Netflix original films suggests a similar pattern.”

“It is difficult to appreciate whether some of Netflix’s peculiarity results from its global reach, business model, or distribution technology, but these are crucial questions to ask. And do these characteristics lead to the availability of stories, characters, and places not readily available? If so, this is a notable benefit to audiences,” she said.

“We should also ask how these characteristics affect opportunities available for writers, producers, and actors who might be rethinking the kind of stories that must be told to sell internationally.

“Appealing to audiences outside a commissioning channel’s country is increasingly necessary. Even if Netflix is unlikely to eliminate national providers, it is reconfiguring the competitive landscape.”

Professor Lotz also posted a blog series, Netflix 30 Q&A, in recent months that examines the differences of the SVOD business and how it allows Netflix different program strategies than linear, ad-supported channels.

“The long term and global rights the company seeks in its commissions have required significant changes in the remuneration norms for those who make its series, and it remains unclear whether the new norms amount to lower pay,” she said.

“National broadcasters worry about keeping up with the escalating fees Netflix can support for its prestige series’ and complain of an unfair playing field where Netflix isn’t subject to the same local content rules and other requirements.

“But business and cultural analysts must stop trying to shoehorn Netflix into the same category as linear channels and streaming services aimed at pushing US content abroad. Over its 23-year-existence, Netflix has evolved repeatedly. Perhaps this steady change fuels its misperception.”