ISS Science for Everyone

Science Objectives for Everyone

The objective of the Haptics-1 experiment is to perform an in-orbit engineering parameter calibration and identification for one joint of an exoskeleton haptic device, and to perform a set of performance measurements withthe  crew operating force reflective controllers in micro-gravity. For this purpose, a single degree of freedom motor-unit with a handle-bar and a control computer is launched to the International Space Station (ISS), to perform a set of identification experiments by the crew. 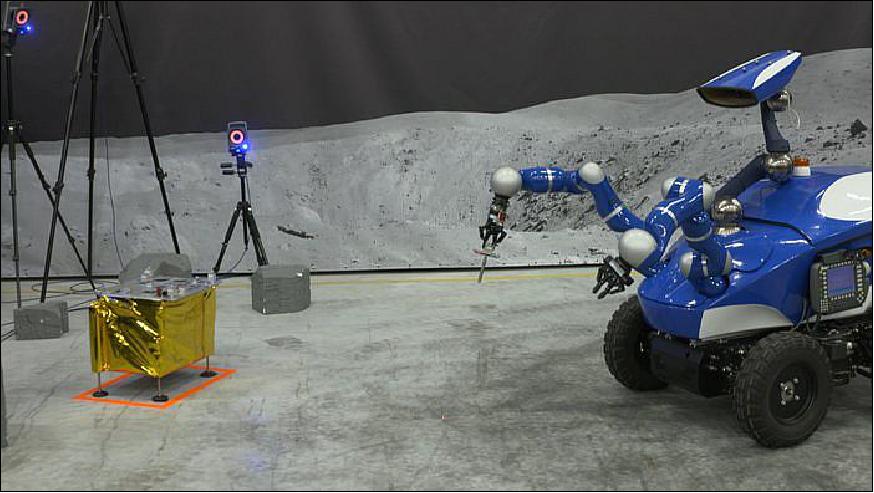 Research Overview
Haptics-1 is an experiment designed to investigate the remote control of robots on the ground from up in orbit. The experiment is a simple-looking lever that can be moved freely to play simple Pong-style computer games. Behind the scenes a complex suite of servo motors can withstand any force an astronaut operator might unleash on it, while also generating forces that crewmembers can feel – just like a standard video gaming joystick as a player encounters an in-game obstacle. To prevent the joystick’s force feedback pushing its free-floating user around, it is mounted to a body harness that can be fixed in turn to standard Station equipment.

Haptics-1 is an experiment that fits in the vision of astronauts controlling planetary explorers from orbit. Ideally, astronauts circling a planet would have as much feedback as possible to help control the robots exploring below them. An important aspect of this is haptic feedback – transferring touch and vibrations.

This is because the brain processes the feeling of touch and takes that into account when handling objects. Haptics-1 is looking at developing robots that transmit touch information to the astronaut, but until now no research has been carried out to see how people in space respond to force feedback. It is unknown if astronauts can feel and/or react the same as on Earth to generated vibrations, or how the feedback feels in space, where to prevent astronauts from floating away the feedback joystick has to be strapped to their bodies.

The system is made of a simple joystick that can move left or right. Behind the scenes, intricate servomotors can apply counterforce or vibrations. ESA Astronauts use the joystick to test the limits of feeling in experiments that are similar to the classic game Pong.