Researchers from Lund University in Sweden have succeeded in producing nanotubes from a single building block using so-called molecular self-recognition. The tube can also change shape depending on the surrounding environment. The results can contribute to the future development of transport channels for drugs through the cell membrane.

In the present study, researchers from Lund University in Sweden, together with colleagues from Vilnius University in Lithuania, have studied how molecules attach to each other using weak chemical bonds to form large structures. 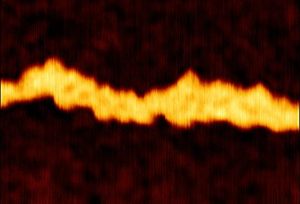 The aim of the study was to determine the smallest possible size of these molecules, in which they are still able to provide enough information to successfully attach and form a desired large structure. The researchers’ strategy has been to use many weak hydrogen bonds which assemble themselves in a pre-programmed manner.

“It took 20 years for us to discover the design of this molecule which resulted in molecular nanotubes”, says Kenneth Wärnmark, chemistry professor at the Faculty of Science at Lund University.

“The molecules can form a tube, but also change into the shape of a capsule or a molecular belt”, Kenneth Wärnmark.

“Being able to regulate the diameter is importance if you, for instance, want to use the tubes to transport something inside”, says Kenneth Wärnmark.

One possible application is the transport of drugs through a cell membrane for which the molecular nanotube can serve as a channel. The diameter of the tube and the properties of its surface make it suitable for transporting substances that regulate nerve signals in the human body, such as acetylcholine.

“People with Alzheimer’s disease suffer from acetylcholine deficiency and hopefully, in the future, this could be a way to reduce the impact of the disease. However, it requires a lot more research as well as clinical studies before we know whether or not it works”, says Kenneth Wärnmark.