According to the British Royal Automobile and the French Automobile clubs, the first car was created in 1770 by the Frenchman Joseph Cugnot. This “Fardier” (French name for a trolley used to transport heavy loads) was a car propelled by a steam engine and powered by a boiler. This 7 m long self-propelled machine reached a speed of 4 km/h, for an average autonomy of 15 min. 250 years later, researchers at the Nara Institute of Science and Technology (NAIST), Japan, in partnership with colleagues in the University Paul Sabatier (Toulouse, France), report in Chemistry – A European Journal a new family of nanocars integrating a dipole to speed up their motion in the nanoworld. 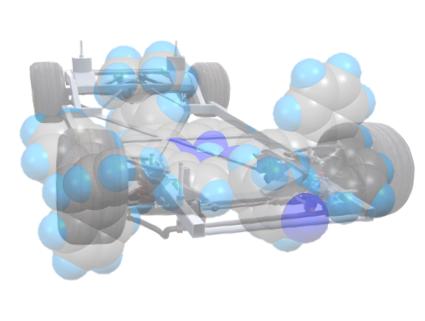 After the first nanocar race organized in spring 2017, in Toulouse (France) we designed a new family of molecules to behave as cars in the nanoworld. When I established my laboratory in NAIST in April 2018, Toshio Nishino (Assistant Professor) and Hiroki Takeuchi (Master student) started the synthesis. Two years later, we are reporting the results in a publication presenting the synthesis of 9 dipolar nanocars. The result is amazing. In every flask, about 100 mg of green or blue powders (i.e. 60 x 1018 nanocars) stick to the walls. These are the Franco-Japanese racing cars that sleep wisely in the garage waiting for the next Grand Prix in 2021.

“To hope to win the race, nanocars have to be fast but they need also to be controllable,” emphasizes Gwénaël Rapenne. The design of the molecules has long been thought to need a compromise between opposite requirements. Consistently, the nanocar Rapenne and his colleagues designed is made up of 150 atoms (chemical formula C85H59N5Zn). A planar chassis made from porphyrin, a fragment already used in nature for many processes like oxygen transportation (hemoglobin) or photosynthesis (chlorophyl). Ultimately, the presence of a zinc atom could allow transportation of small molecules on the car body. “The nanocar is 2 nm long and surrounded by four wheels designed to minimize contact with the ground and has two legs which are able to donate or accept electrons making the nanocar dipolar” specifies the researcher.

What kind of application could be envisioned with such small vehicles?

“Honestly, today, we do not know yet what this technology will be used for. But just like the liquid crystals discovered in 1910 and not used until half a century later in calculator screens and now in all our LCD supports, the manipulation of molecules could well be revolutionary, ” dreams Gwénaël Rapenne. One of the directions of the research could be to carry a load to transport reactants or drugs from one place to another.