ANU scientists have designed a nano crystal around 500 times smaller than a human hair that turns darkness into visible light and can be used to create light-weight night-vision glasses.

Professor Dragomir Neshev from ANU said the new night-vision glasses could replace the cumbersome and bulky night-vision binoculars currently in use. 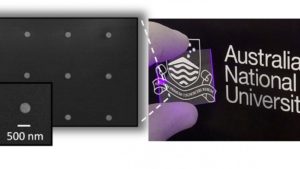 “The nano crystals are so small they could be fitted as an ultra-thin film to normal eye glasses to enable night vision,” said Professor Neshev from the Nonlinear Physics Centre within the ANU Research School of Physics and Engineering.

“This tiny device could have other exciting uses including in anti-counterfeit devices in bank notes, imaging cells for medical applications and holograms.”

Co-researcher Dr Mohsen Rahmani said the ANU team’s achievement was a big milestone in the field of nanophotonics, which involves the study of behaviour of light and interaction of objects with light at the nano-scale.

“These semi-conductor nano-crystals can transfer the highest intensity of light and engineer complex light beams that could be used with a laser to project a holographic image in modern displays,” said Dr Rahmani, a recipient of the Australian Research Council (ARC) Discovery Early Career Researcher Award based at the ANU Research School of Physics and Engineering.

PhD student Maria del Rocio Camacho-Morales said the team built the device on glass so that light can pass through, which was critical for optical displays.

“This is the first time anyone has been able to achieve this feat, because growing a nano semi-conductor on a transparent material is very difficult,” said Ms Camacho-Morales from the Nonlinear Physics Centre at ANU.

The innovation builds on more than 15 years of research supported by the ARC through CUDOS, a Centre of Excellence, and the Australian National Fabrication Facility.

The research is published in Nano Letters and is being presented by Dr Rahmani at the Australian Institute of Physics Congress in Brisbane this week.