Mitsubishi Electric Corporation (TOKYO: 6503) announced today that it has developed a 19.9-millimeter-thin inspection robot capable of inspecting a power generator by passing through the narrow gap between the rotor and stator, eliminating the need to remove the rotor. The robot reduces the cost and time of inspections and helps to increase the reliability and availability of power generators. 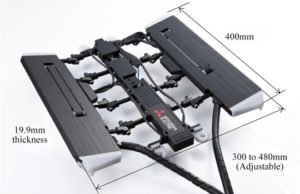 Conventional generators inspections, which are carried out by professionals every four years, require approximately 34 days to complete, in part because the rotor must be removed. Electric power companies have been looking to shorten these inspections as well as improve inspection accuracy to extend the availability of their generators. Mitsubishi Electric’s ultra-thin inspection robot eliminates the need to remove the rotor, so inspections can be completed in just six days. Further, thanks to its high accuracy, inspections can be carried out less frequently than every four years and help operators avoid stocking parts they do not yet actually need. As a result, Mitsubishi Electric’s new robot is expected to help reduce total inspection costs and improve both the reliability and availability of power generators.

Conventional inspection robots are about 30-millimeters thick and thus unable to pass through the narrow gap between the rotor and stator in approximately 30 percent of Mitsubishi Electric power generators. Mitsubishi Electric’s new ultra-thin inspection robot is designed to travel in the narrow gap between the generator’s rotor and stator to perform accurate inspections, including assessment of stator wedge tightness, detailed visual examinations and core insulation inspections. The robot incorporates a proprietary traveling mechanism comprising a crawler belt and flat plate to achieve a thin 19.9-millimeter profile and low vibration for accurate data acquisition. It is capable of inspecting all Mitsubishi Electric mid- and large-sized generators.

The robot’s proprietary tapping mechanism, which incorporates a space-saving cam, is capable of delivering a striking force that is 10 times that of a conventional mechanism. The tapping test uses original vibration analysis technology to accurately detect five levels of stator wedge tightness, an increase compared to the three levels detectable by a conventional robot.