Four of five mining and metals companies expect to increase their spending on digital technologies over the next three years, with more than one-quarter (28 percent) planning significant investments and almost half (46 percent) citing digital as the biggest contributor to innovation, according to new research from Accenture (NYSE: ACN).

Based on a survey of approximately 200 mining and metals executives and functional leaders worldwide, the Digital Technology in Mining report shows that the convergence of information and operational technologies (IT/OT) and adoption of cloud computing are advancing the digital agenda, prompting the need for more-stringent cybersecurity measures.

Mining and metals executives said their companies have applied and will continue to apply digital technology over the next three to five years predominantly in mine operations, but also in exploration, mine development and other areas. Most of the investments in mining operations target robotics and automation, named by 54 percent as a top spending area, along with remote operating centers, drones and wearable technologies, each at 41 percent.

“As miners continue to face weak global demand, excess capacity and increasingly limited access to resources, the desire to innovate through digital technologies emerged as a key finding of our research,” said Rachael Bartels, global managing director for Accenture’s Chemicals and Natural Resources practice. “Cost reduction is still on the agenda for miners, but the focus is squarely on better performing operations. Digital technologies enable operations to adjust to changing geology and market conditions, while still delivering returns.” 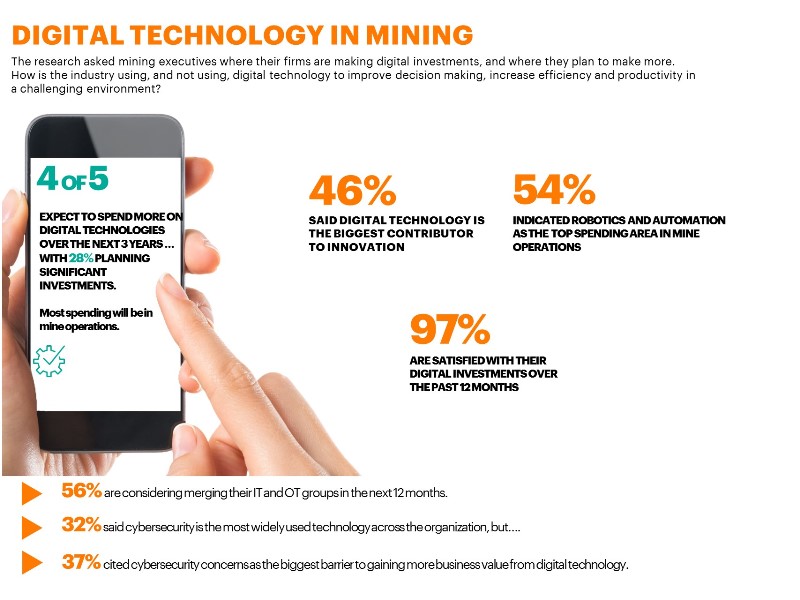 Organization-wide, the most often cited benefit from current digital technology investments was improved workforce productivity, driven most by mobile/tablet devices (32 percent), automation of mobile and/or fixed assets (30 percent) and simulating physical environments (30 percent). Cost savings across the organization ranked lower as a benefit than improved workforce productivity in general.

The relatively early stages of adoption for certain digital technologies might make it a challenge to identify all areas of bottom-line benefits of digital. However, digital transformation could actually unlock USD $190 billion in value industry wide over the next 10 years, according to an analysis by the World Economic Forum with Accenture Strategy: “Mining and Metals Digital Transformation and the industry’s ‘new normal.’”

Overall, almost all executives (97 percent) said they were satisfied with their digital investments over the past 12 months, with almost two-thirds (64 percent) ‘relatively satisfied’ and one-third (33 percent) ‘extremely satisfied.’

However, executives cited cybersecurity as the most-widely adopted technology across the organization-wide (32 percent). In addition, 25 percent said they are testing pilot programs for cyber security, and 33 percent have developed or are defining strategies for it.

“As we see an increasing uptake of technologies like cloud computing, the Internet of Things and the convergence of IT/OT, the industry recognizes its rising exposure to cyberattacks,” said Amy Callahan, a managing director in Accenture’s Mining practice. “The data these technologies can provide will allow for more timely, informed and better decisions, but it’s crucial to ensure that the appropriate security is in place to manage cyber risk and protect critical assets across the value chain.”

Regarding IT/OT integration, more than half of the respondents (56 percent) reported that their organizations are considering merging their IT and OT departments in the next 12 months, which would advance this trend.

Mining and metals companies are also continuing to adopt cloud computing technologies broadly. Four in five respondents (81 percent) said their companies have implemented some form of public, private or hybrid cloud, and another 17 percent said their company is exploring the use of cloud technology.

Methodology
Accenture conducted an online survey of 201 C-level and top management executives and functional leaders in the mining and metals industry. The survey was fielded in mid-October through mid-November 2016 and included respondents from Australia, Brazil, Canada, Chile, China/Hong Kong, Indonesia, India, Singapore, South Africa, the United States and United Kingdom. The companies represented have annual revenues ranging from USD $500 million to more than USD $20 billion.

About Accenture.
Accenture is a leading global professional services company, providing a broad range of services and solutions in strategy, consulting, digital, technology and operations. Combining unmatched experience and specialized skills across more than 40 industries and all business functions – underpinned by the world’s largest delivery network – Accenture works at the intersection of business and technology to help clients improve their performance and create sustainable value for their stakeholders. With approximately 401,000 people serving clients in more than 120 countries, Accenture drives innovation to improve the way the world works and lives. For more info, visit www.accenture.com.