A meteorite impacting the earth under a grazing angle of incidence can do a lot of damage; it may travel a long way, carving a trench into the ground until it finally penetrates the surface. The impact site may be vaporized, there can be large areas of molten ground. All that remains is a crater, some debris, and an extensive trail of devastation on both sides of the impact site.

Hitting a surface with high-energy, heavy ions has quite similar effects – only on a much smaller scale. At TU Wien (Vienna), Prof. Friedrich Aumayr and his team have been studying the microscopic structures which are formed when ions are fired at crystals at oblique angles of incidence. 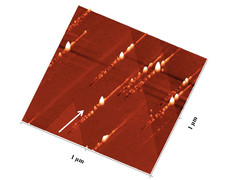 Nanostructures on a crystal after ion bombardment: Trenches with nanohillocks on either side are created. At the impact site, a particularly large nanohillock is formed. Credit: TU Wien

“When we take a look at the crystal surface with an atomic force microscope, we can clearly see the similarities between ion impacts and meteorite impacts”, says Elisabeth Gruber, PhD-student in Friedrich Aumayrs team. “At first the projectile, scratching across the surface at a grazing angle, digs a trench into the crystal surface, which can be hundreds of nanometers long. Extensive ridges appear on either side of the trench, consisting of tiny structures called nanohillocks.” When the projectile ultimately enters the crystal and disappears, an especially large hillock is created at the impact site. Beyond that, the ion keeps moving below the surface, until it finally comes to a halt.

This may sound simple and obvious, as if high energy ions just behaved like tiny, electrically charged bullets. But in fact, it is not at all self-evident that objects on a nano scale behave like macroscopic objects do. When atoms exchange energy, quantum physics always plays an important role.

“When the high-energy ions interact with crystal surfaces – calcium fluoride, in our case – many different physical effects have to be taken into account”, says Friedrich Aumayr. “Electrons can change their energy state, they can exchange energy with atoms around them and excite vibrations in the crystal lattice, the so-called phonons. We have to carefully consider all these effects when we want to understand how the nanostructures on the crystal surface are created.”

Melting and Evaporation
In order to understand the mechanism leading to the nano-trenches and hillocks, the team developed extensive computer simulations, together with colleagues from Germany. “That way we can determine, how much different parts of the crystal surface are heated up”, says Elisabeth Gruber. “There are regions which become so hot that the material melts, at certain points it can even evaporate. When we know how large these regions are, we can predict very accurately what the nanostructures on the crystal surface will look like.”

The goal of this line of research is not only to understand how tailored nanostructures can be created. It is also important to find out how different materials are harmed by heavy ion bombardment. “Calcium fluoride is often used as an insulator in semiconductor technology”, says Friedrich Aumayr. “We want our electronics to work, even under extreme conditions, for instance in a satellite which is exposed to cosmic radiation.” When the calcium fluoride layer is riddled with tiny holes, it can cause the device to short circuit and fail. Therefore, it is vital to understand the interaction of crystal surfaces and fast ions. 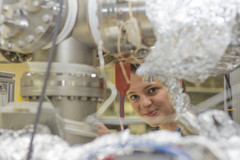 Elisabeth Gruber in the lab at TU Wien

Very similar effects can also be achieved using highly charged ions, as the Viennese group shows in another paper which will is accepted for publication in Physical Review Letters:
A.S. El-Said et al., Tuning the fabrication of nanostructures by low-energy highly charged ions, Physical Review Letters, accepted for publication 24.08.2016