Meta 2 Development Kit, the first augmented reality (AR) product that delivers a totally immersive experience unlike any other AR product to date. Meta 2 enables hand interaction with digital content, a breakthrough in the field of AR, so people can touch, grab, and move digital objects intuitively, just as they do in the real world.

Meta CEO Meron Gribetz demonstrated the technology at TED 2016, with Meta 2 Development Kit being hailed as one of the most significant technology announcements in recent years. Technology pundit and futurist Robert Scoble called Meta 2 “the most important new product since the original Macintosh.” 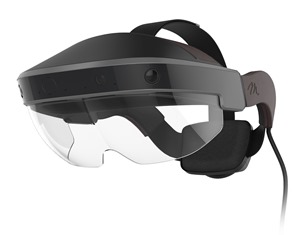 In his TED Talk, Gribetz painted his vision for The Neural Path of Least Resistance™, a neuroscience-based interface design approach for zero-learning-curve computing, saying, “We are creating an experience that merges the art of user interface design with the science of the brain, creating ‘natural machines’ that feel like extensions of ourselves rather than the other way around. For example, our natural hand motion doesn’t rely on clicks or buttons, thereby maintaining the flow and connecting people to each other and the moment.”

Meta is working closely with developers to create Meta 2 applications that have the potential to fundamentally change the way people collaborate, communicate and engage with information and each other. Developers are also creating compelling market-specific applications for Meta across a range of industries, including medicine, education, and manufacturing. Meta 2 Development Kit is the company’s second-generation AR technology and was designed with input from nearly 1000 companies that were users of the first-generation Meta 1 product including developers, early adopters, and academics.

A large FOV liberates users from the confines of screen size, making it easier to work, collaborate, and create or design. Meta 2 has the largest Field of View (FOV) of any product on the market, making it the most immersive AR experience available today.

The FOV of most competitive systems is significantly smaller than Meta’s FOV, which hampers the user experience.

You are the operating system is a guiding principle of Meta 2, meaning the system has been developed to work in the most intuitive way for the brain. While allowing people to use the traditional means of interacting with technology through keyboards and other devices, Meta 2 enables people to easily access, manipulate, and share digital information in ways that are natural and enhance productivity and collaboration. Examples of AR applications built on interfaces designed to work like the human brain include:

From infancy, hands are the tools people use to engage with their environments. Meta 2 is hand-controlled because there is no more natural way for someone to work or engage with others. No input device is required. On-board cameras for hand interactions and positional tracking make it possible to see digital content, grab it, and move it by hand just as you would with any physical object. You can also track objects, such as a pen or paint brush. By using natural hand interaction, Meta overcomes the limits of many other AR products, which require specific gestures that mimic those used with input devices, like the mouse, or lack hand control entirely.

Born in NYC and raised in Silicon Valley, Meta has been defining the field of Augmented Reality (AR) since the company’s inception in 2012. After a successful Kickstarter campaign, Meta was selected by Y Combinator (YC12) for seed funding. Meta entered the marketplace with the first see-through glasses that allowed wearers to move and manipulate 3D content intuitively, using natural hand interactions. With the introduction of the groundbreaking Meta 2 product at TED 2016, Meta is once again redefining the market and delivering a new generation of natural machines that will become a healthy, vital extension of who we are.