Despite plans to invest in machines and artificial intelligence as part of their strategy to boost productivity, many automotive and industrial equipment companies are failing to implement the measures needed to harness these capabilities, according to a new report from Accenture.

The report, “Machine dreams: Making the Most of the Connected Industrial Workforce,” is based on interviews with more than 500 business executives in Asia, Europe and the United States involved in setting their company’s strategy for the connected industrial workforce. According to the report, manufacturing and production are undergoing rapid change as machines and artificial intelligence are becoming closely integrated with personnel, creating the connected industrial workforce. By combining mobile, safety and tracking technologies with analytics, companies are enhancing the activities of an industrial worker. 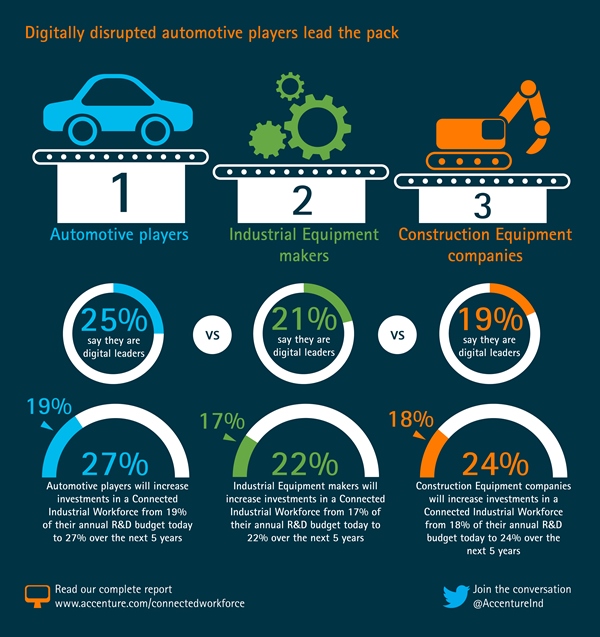 The report concludes that the creation of a connected industrial workforce is already part of the business strategy of the majority of automotive and industrial equipment producers, cited by 94 percent of respondents. Respondents estimate that their companies could spend up to one-quarter of their R&D expenditure over the next five years on connected industrial workforce technologies. This could reach €181 billion for automotive companies and €39 billion for industrial equipment companies.

But while the manufacturing companies surveyed believe that the impact of the connected industrial workforce will be significant, the research reveals that the companies making these investments could fail to maximize the competitive advantage that the investments can bring. For instance, fewer than one-quarter (22 percent) of respondents said their companies have implemented measures designed to realize the potential of a connected industrial workforce, with 85 percent of respondents describing their companies as digital followers or laggards, rather than leaders.

One of the issues that could adversely impact the implementation of a connected industrial workforce is the related technology. Data vulnerability is seen as a medium or high risk for 76 percent of respondents, while system complexity and related vulnerability is seen as medium or high risk by 72 percent of respondents. In addition, more than two thirds (70 percent) of respondents consider a shortage of skilled human workers to be a high or medium risk. This could also impact their ability to deliver on their connected industrial workforce strategy.

“Those leading manufacturers investing in digital technologies to harness competitive advantage are spending almost twice as much as laggards on the connected industrial workforce – and will continue to raise the bar over the next five years,” said Eric Schaeffer, senior managing director and head of Accenture’s Industrial practice. “We also see laggards lacking the confidence to implement the technologies that underpin a successful connected industrial workforce and this may threaten their competitiveness.”

The vast majority of respondents – 85 percent – said they expect the focus of technology in manufacturing to evolve from human to human-machine-centric, where collaborative machines, humans augmenting machines and autonomous machines are combined to create a more effective workforce. A number of the organizations surveyed have a clear focus for investments relating to workforce effectiveness. Autonomous guided vehicles – mobile robots that move materials around a facility or warehouse – already account for half of spending by these companies in this area and will continue to account for much of it in the future. The same organizations plan to boost their investments in both collaborative robots (“cobots”) and augmented reality devices, including smart glasses and helmets, over the next five years.

In their efforts to tackle the security concerns, a number of respondents are also investing heavily in upgrading their existing IT infrastructures to help ensure a securely connected workforce. Among the respondents who believe they are leading  the creation of the connected industrial worker, 89 percent have started to hire new talent to close the skills gap.

Among the respondents who are seeking to use technology to to help them improve productivity, the automotive manufacturers and suppliers have the highest interest in collaborative robots, automated guided vehicles  and augmented reality devices.

“As cobots take on more and more specialized tasks, leading manufacturers that are investing in digital to harness competitive advantage are moving rapidly toward human-machine-centric manufacturing,” added Schaeffer.

About the research
Accenture interviewed 512 business professionals at companies in China, France, Germany, Japan and the United States. All respondents were involved in setting their company’s strategy for the Connected Industrial Workforce; the sample included factory directors, engineering and R&D heads, operations and HR managers, and C-suite executives.  More than half were from the industrial equipment industry, with the rest split between automotive and construction equipment. The interviews were conducted in December 2015.

About Accenture
Accenture is a leading global professional services company, providing a broad range of services and solutions in strategy, consulting, digital, technology and operations. Combining unmatched experience and specialized skills across more than 40 industries and all business functions – underpinned by the world’s largest delivery network – Accenture works at the intersection of business and technology to help clients improve their performance and create sustainable value for their stakeholders. With approximately 373,000 people serving clients in more than 120 countries, Accenture drives innovation to improve the way the world works and lives. Visit Accenture at www.accenture.com.